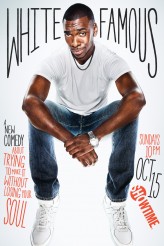 The show runner talks about Season 1 of his new comedy. 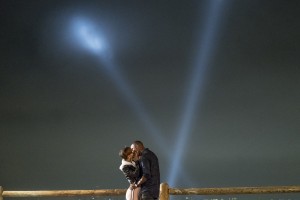 Showtime’s Sunday-night half-hour comedy WHITE FAMOUS is loosely based on the life of Jamie Foxx. Jay Pharoah plays Floyd Mooney, balancing the success he enjoys as a standup comedian among black audiences with trying to work as an actor and gain traction with white viewers.

Tom Kapinos, who had previously created Showtime’s long-running dark comedy CALIFORNICATION, created WHITE FAMOUS with Buddy Lewis and Chris Spencer. He talks about the series’ beginnings and how it all works.

ASSIGNMENT X: How did WHITE FAMOUS come together? Did Jamie Foxx come to you with it?

TOM KAPINOS: No. Showtime came to me a couple of summers ago. I guess they had bought this from Jamie and a couple of his buddies who do standup and I guess they were never quite happy with how the script turned out, so they just asked me to take a crack at it. Then I met Jamie, and he was hilarious, and it just went from there.

AX: Did anybody think it was rather strange that they asked a white writer to do this story that is largely about being black in Hollywood?

KAPINOS: You know, that would be more a question for Showtime, because they just thought, I think, based on CALIFORNICATION, that I could bring my comedic voice to it. I mean, I certainly thought it was odd, but after I met Jamie, it was just such a fun meeting, and I was like, “Yeah, this seems like another opportunity to create an out-there comedy in the cable space.”

AX: Did you learn anything in the course of doing WHITE FAMOUS?

KAPINOS: I wouldn’t say I learned anything. I just approached it as trying to make a fun comedy with heart. I always approached it as, “I’m going to try and do something cool and outrageous and fun.”

AX: Are the things that happen in the show based on any specific experiences Jamie Foxx has had, or is it more just the tone of it?

KAPINOS: The times I met with him, he always has a ton of stories. So I would take fragments of that and just kind of work it into what Lloyd was going through. So there’s little beads and pieces, but it’s not – there’s no one thing that is based on his experience.

AX: As your leading man Jay Pharoah actually has a background in standup, is any of his comedy incorporated into the scripts?

KAPINOS: A little bit here and there. In the pilot, you see a little bit of it. But I definitely didn’t want to do something that was just in and around comedy clubs. So it was more about him being kind of Alice in Wonderland and dumped into white Hollywood and what that felt like to him and just the crazy people you meet out here. So it’s a little bit more Hollywood-focused than standup comedy-focused.

AX: Stephen Tobolowsky’s character from CALIFORNICATION, producer Stu Beggs, has carried over into WHITE FAMOUS. Are any other CALIFORNICATION characters going to show up?

KAPINOS: There are a few minor characters that work their way into the show. It’s fun. Because to me, it’s the same Los Angeles as CALIFORNICATION, so you run into some of the same people. I don’t know if we’ll ever make our way up to Hank Moody [CALIFORNICATION’s protagonist, played by David Duchovny], but there will be a few.

AX: Stephen Tobolowsky has said he came in to do the pilot script read for WHITE FAMOUS, thinking he was just doing the reading that one time, without knowing you intended him to be in it or that it would be the Stu Beggs character …

KAPINOS: Yeah. When I wrote the pilot, the character was just kind of a crazy producer, and we had a difficult time casting the part. We got down to the wire, and we came up with the idea to have [Tobolowsky] come in and read it just as a favor. And it was just so fun, and there were so many laughs, I just decided with Showtime’s blessing that we make it the same character.

AX: And is executive producer/director Tim Story involved in the writing at all?

KAPINOS: Tim came on after I had written the pilot script and Showtime decided they wanted to make it. He’s the producing director. He’s involved in the sense that he’s free to come to me if he has a note on something. He directed Episodes Two and Three and he’s going to direct our finale as well.

AX: You’re the show runner as well as the co-creator?

AX: Have you brought in any of your CALIFORNICATION writers?

AX: Would you say that WHITE FAMOUS is a little more upbeat in tone than CALIFORNICATION?

KAPINOS: Yeah. I think that’s a good way to phrase it. I mean, it’s crazy, but it’s a lot lighter than CALIFORNICATION. I think that has something to do with the main character is at a different place in life. He’s struggling to get somewhere. It’s not like he’s world-weary and been through a lot. So yeah.

AX: Well, Floyd is not going through a suicidal personal crisis …

KAPINOS: Exactly. Although there is a love story of being with a woman, and it didn’t quite work out the way he wanted, so that’s always there, that’s a similarity, but it’s much lighter in tone.