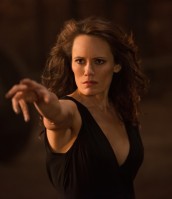 TV Review: SUPERNATURAL – Season 11 – “All in the Family”

We lose a great character, but still have fun 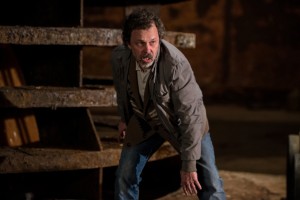 Alas, Metatron (Curtis Armstrong). Yes, you were a Grade A jerk (editorial policy forbids a stronger term) for multiple seasons, but you were always entertaining. This season, you’ve been comedy gold, and went out a hero for nothing less than the cause of God and humanity (and probably the Earth’s crust and plankton and other things, too).

Meanwhile, we at long last find out what’s happening with dead but last seen as a ghost Prophet of the Lord Kevin Tran (Osric Chau) and meet appalled new prophet Donatello Renfield (Keith Szarabajka), who’s kind of a hoot.

Chuck (Rob Benedict), aka God, reveals himself to Sam (Jared Padalecki) and Dean (Jensen Ackles). When they’re not sure he’s really Chuck, let alone the Almighty, he whisks them to his safe place. The long-absent Kevin is there, well and happy. Chuck gives Kevin an “upgrade,” apparently making him an angel. Dean, trying to tread the fine line between the anger he’s feeling and the fact that Chuck is, well, Chuck, asks how and why there has been no divine help on Earth for thousands of years. Chuck explains that he had to let his creation stand on its own, and that he feels humankind has in fact gotten better over time. When Dean makes further comment on Chuck’s long absence, Chuck says, “Don’t confuse me with your dad.” Ouch, and point scored.

Amara (Emily Swallow) is torturing Castiel/Lucifer (Misha Collins), in the hope that he’ll beg her brother God for help. Lucifer refuses, and points out that Amara can’t create, only destroy.

Back at the Men of Letters headquarters, the Winchesters gently try to urge Chuck to rescue Lucifer (because of Cass), but Chuck refuses. He can’t trust Lucifer, and denies that Lucifer helped him banish Amara way back when. Chuck does however want the boys to help him stop Amara from destroying the world. When Chuck is not there, Dean summons Amara, who shows up – and shows him how badly she’s beaten up Lucifer/Castiel.

Amara has sent her deadly fog to a town, killing thousands. Chuck calls this “regrettable,” but doesn’t intervene. There is one survivor, Professor Donatello Renfield, who explains that he’s named after “him.” Dean asks, “You were named after a mutant ninja turtle?” Sam looks pained and Donatello explains about the Renaissance artist. In any event, Donatello shows signs of being a Prophet of the Lord – when the fog rolled in, he was zapped by lightning and has had visions. When he’s able to read the language of angels, this confirms it.

Understandably, Donatello freaks out. He initially babbles on meeting Chuck, but Chuck’s easygoing manner helps him calm down.

Metatron calls the Winchesters. They meet him in a bar, and the former Scribe of God shows them Chuck’s autobiography, which Metatron calls “a suicide note.” Chuck plans to sacrifice himself to Amara. When Dean confronts Chuck about it, Chuck says it’s strategy – he’ll let Amara cage him if she promises not to destroy the world. Dean, who has been in Amara’s head, doesn’t think she’ll go for this deal. SUPERNATURAL seldom mentions any religions by name, but self-sacrifice is a component of most of them. Points for letting Chuck be willing to walk the walk.

Chuck also mentions that he saved Dean years ago so that Dean could fight for him. For those wondering about the beginning of Season 4, when Castiel pulled Dean out of Hell – the explanation at last, near the end of Season 11. It’s good to know that if SUPERNATURAL lasts long enough, eventually, they’ll explain everything.

Dean comes up with a plan. Amara has asked him to meet with her privately, so he’ll keep her occupied while Sam, Metatron (who knows spells) and Donatello (who can sense Amara’s presence) find and rescue Lucifer/Castiel.

Amara wants Dean to become part of her and be eternal. Dean admits he feels drawn to her, but doesn’t want to do this. Then Amara “sees” that Dean has been in contact with her brother (Chuck/God) and feels betrayed.

Metatron uses a spell to free Lucifer, who is angry enough at Amara to join Team Chuck now. Metatron offers to stay behind while Sam and Donatello take Lucifer back to Chuck. So Metatron is still there when Amara returns to her prison space. Metatron’s spell against Amara doesn’t work and she blasts him into smoke.

Sam, Donatello and Lucifer are in the car, driving as fast as possible, but Amara blocks their path. She seems ready to smite all of them –

… and suddenly they and the car are back at the Men of Letters headquarters. Chuck once in awhile answers prayers. The boys are impressed that in the end, Metatron gave himself for his God and for creation. Chuck and Lucifer size each other up (it’s been millennia since they’ve seen each other). They each say to the other, “You’ve changed,” though Chuck says he hasn’t changed that much.

Dean explains to Sam that Amara wants him to join her in the most literal sense.

Apart from making it clear that the stakes are really huge, “All in the Family” does a great job of putting forth why Chuck has stayed away from humans for so long (a question theology has been grappling with forever – this is as good an explanation as any). We’re also made to actually mourn the loss of Metatron, which is quite an accomplishment, giving what a horrible creature he was for so long. And Szarabajka (Holtz on ANGEL) is delightful as the flummoxed Donatello. When the boys recap what the poor guy needs to know as a new Prophet, it’s SUPERNATURAL at its dizzy finest.