Things are coming together in this well-paced episode 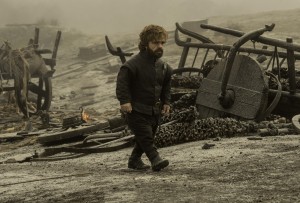 Fans of Jaime Lannister (Nicolaj Coster-Waldau) can rest easy for now – despite his dire underwater predicament in the previous episode of GAME OF THRONES, he starts the Season 7 episode “Eastwatch” being pulled out of the river by Bronn (Jerome Flynn). Bronn still wants payment for services rendered, and until he gets them, Jaime is not allowed to be killed by dragons, suicide or anything else. Bronn had previously knocked Jaime into the river to prevent him from being burned to death by the dragon Drogon when Jaime charged at Daenerys (Emilia Clarke) on the battlefield. Daenerys was next to Drogon at the time, and Drogon, as we know, doesn’t think much of people who attack his human mom.

Tyrion (Peter Dinklage) walks the battlefield, now a terrible scene of scorched destruction. Daenerys offers a choice to the surviving Lannister troops – they can join her and bend the knee, or die. A few men kneel immediately. More kneel after Drogon roars at them. Randyll Tarly (James Faulkner) refuses to kneel. He indicates that he wants his son Dickon (Tom Hopper) to accept the queen’s mercy, but Dickon stands with his father. Tyrion counsels mercy, but Daenerys says if they offer the option of imprisonment, too many men would take it. She doesn’t want to put anybody in chains. Rather than have the Tarlys beheaded, she has Drogon incinerate them. This causes just about all the remaining Lannister troops to drop to their knees.

In King’s Landing, Jaime gives a grim report to his sister/lover Cersei (Lena Headey). Most of the Lannister troops are dead or have joined Daenerys, and he doesn’t think an army of mercenaries, or any other army, can defeat the Dothraki, much less dragons. Cersei intends to die fighting. Well, no peace in our time, then.

When Daenerys returns to Dragonstone, riding Drogon, Jon Snow (Kit Harington) is there when they land. Drogon extends his muzzle, to the great astonishment of both Daenerys and Jon. Jon removes his glove and touches the dragon. Neither Daenerys nor Jon mentions how unheard-of it is for the dragon to let anyone but Daenerys touch him. We of course know that Drogon can tell Jon is a Targaryen, but since neither Jon nor Daenerys are aware of this, they are understandably baffled. Daenerys reiterates that she thinks of the dragons as her children. She then asks about Davos (Liam Cunningham) saying that Jon took a knife to the heart. Before Jon can admit that, yes, this was meant literally, the long-gone Jorah (Iain Glen) shows up, cured of his greyscale. Daenerys is overjoyed to see him, and vice-versa.

At Winterfell, Bran Stark, aka the Three-Eyed Raven (Isaac Hempstead Wright), has a vision through the eyes of actual ravens. The Night King and the dead are on the march toward the Night’s Watch castle of Eastwatch.

At the Citadel, Sam (John Bradley) hears the maesters talking about a message from a crippled boy who claims to have had visions of White Walkers. Sam realizes they must be talking about Bran. Sam makes an impassioned plea for Archmaester Ebrose to tell people the White Walkers are real, and to rally the lords to send troops north to defend the land. Ebrose says he’ll consider it. Once Sam has left the room, Ebrose tells the other maesters he hasn’t had the heart to tell Sam of the deaths of his father and brother.

Doing his assigned task of reading scrolls, Sam is getting fed up. He doesn’t pay any attention when Gilly (Hannah Murray), who’s trying to help with the reading, mentions that Rhaegar Targaryen had his marriage annulled and secretly married someone else. Alrighty, then, Jon doesn’t just have Targaryen blood, he’s the legitimate son of Rhaegar, Daenerys’ older brother. But again, nobody is making the connections, except Bran, who may or may not mention it to Jon if they ever see each other again. Sam finally can’t stand the idea of sitting and doing nothing, so he packs up Gilly and baby Sam and they all head north.

At Dragonstone, Tyrion expresses to Varys (Conleth Hill) his dismay at seeing Daenerys have Drogon incinerate the Tarlys. Varys says that Daenerys isn’t her father, the Mad King, and that Tyrion should essentially be able to talk her out of being evil. There are several arguments here. On one hand, Daenerys doesn’t seem to be turning evil, just pragmatic. On the other hand, it’s evil to burn people alive. On the third hand (this is an octopus of a dilemma), Daenerys has a lot of personal experience of immediately improving her situation via fire. Also, as she says to Tyrion, she can’t put a lot of prisoners in chains when she’s gained the trust of her subjects by breaking chains.

Jon gets scrolls says Arya (Maisie Williams) and Bran are now both at Winterfell, along with Bran’s warning about Eastwatch. Jon sees it as more urgent than ever that everyone – including and especially Cersei and Daenerys – put aside their differences to fight the threat of the dead. The problem is that Cersei is not going to listen to anyone on this subject without proof. Tyrion proposes bringing a Walker to King’s Landing to show that the threat is real. Cersei listens to Jaime, and Jaime might listen to Tyrion.

Davos agrees to get Tyrion into King’s Landing, and Jorah offers to go beyond the Wall with Jon to capture a Walker. Jon asks for Daenerys’ trust. She gives it to him. Hey, if Jon is good enough for Drogon to trust him, who is she to refuse?

Back at Winterfell, some of the Northern lords are so annoyed with Jon for going south while they’re in a crisis situation that they say they’d rather Sansa Stark (Sophie Turner) lead them. Sansa says she’s flattered, but she’s just running things while Jon is away. In private, Arya (Maisie Williams) accuses Sansa of actually wanting Jon to stay gone. Sansa protests, but Arya is sure this is what Sansa is thinking.

Then Arya overhears a conversation between Baelish (Aiden Gillen) and one of the lords, who gives the schemer a scroll that’s supposed to be the only copy in Winterfell. Arya sneaks into Baelish’s quarters and finds the scroll. It’s the one Cersei made Sansa write way back in Season 1, branding Stark patriarch Ned a traitor. Cersei of course promised to spare Ned’s life, and then Joffrey had him executed anyway. We see that Baelish sees Arya leaving his chamber, so he perhaps meant her to find the scroll to sow further discord between the sisters. Arya of course doesn’t know the letter was coerced, and Sansa doesn’t know it’s there, so …

In King’s Landing, Bronn brokers a meeting in the sewer between Tyrion and Jaime, who doesn’t realize he’s going to see his little brother until it happens. Jaime is still livid with Tyrion for killing their father. Tyrion has a good case for his actions – not only did Tywin hate his youngest son for being a dwarf, he was going to have him executed knowing that he was innocent – but Jaime doesn’t want to hear it. He does listen to what Tyrion has to say about the Walkers, but since we already know this, we don’t get the scene of that discussion.

When Jaime comes to talk to Cersei about what Tyrion said, it turns out Cersei already knows about the meeting. She at first doesn’t want to believe Jaime when he says that their son Joffrey was not killed by Tyrion after all – Cersei really likes to hang on to her grudges – but Jaime painstakingly lays out why he believes Olenna Tyrell’s confession. Cersei agrees to Daenerys’ proposed armistice, the better to lull Daenerys into a false sense of security. Uh-oh. And Cersei is pregnant again. She’s happy for the world to know brother Jaime is the father. She doesn’t think they have to concern themselves with anybody else’s opinions. In this matter, and only this matter, Cersei may be right: after all, they had three children who were physically healthy, and two of the three were perfectly sane individuals.

Davos returns to Flea Bottom where he finds Gendry (Joe Dempsie) – remember Gendry? He was one of Robert Baratheon’s out-of-wedlock children who escaped Cersei and Joffrey’s massacre only to almost get sacrificed by Melisandre back in Season 3. The last we saw Gendry, he was rowing away to safety after Davos had rescued him. Gendry is now a swordsmith, but he’s happy to go with Davos before Jon’s advisor even has a chance to explain what’s happening. Although he makes swords, Gendry ironically doesn’t know how to wield one, but that’s fine, because he’s very handy with his huge war hammer. Gendry demonstrates the hammer’s use on a couple of King’s Landing soldiers who take too much interest in Tyrion on the beach while Davos is trying to sail them all back to Dragonstone.

At Dragonstone, despite Davos saying that Gendry should keep his background to himself, the young man promptly introduces himself to Jon as Robert Baratheon’s bastard. Gendry also offers to go north of the Wall on the wight-catching expedition.

At Eastwatch, Jon confers with Wildling chief Tormund Giantsbane (Kristofer Hivju). There are three prisoners in the dungeon: the Hound (Rory McCann), the oft-dead-and-revived Beric Dondarrion (Richard Dormer) and Thoros of Myr (Paul Kaye). Despite Gendry’s aversion to followers of the Red God (that whole business with Melisandre), Jon decrees that they’re now all on the same side: “We’re all breathing.” Excellent point. And so it is that Jon, Tormund, Jorah, Gendry, the Hound, Beric and Thoros all go into the freezing ice north of the Wall to try to catch some undead proof of the war to come.

Like just about all episodes of GAME OF THRONES, “Eastwatch” is strong and smart, with great moral conundrums. It also has a bit more overt humor than usual, with Tyrion quipping that he’s missed Jorah because “Nobody glowers quite the way you do,” Davos and Gendry teasing back and forth, and Gendry’s first meeting with Jon.

Then there’s a lot of darkness, starting with the execution of the Tarlys and shading further into the mistrust between Sansa and Arya, to say nothing of the prospect of what Cersei may do if she gets near Daenerys. You win or you die, indeed.