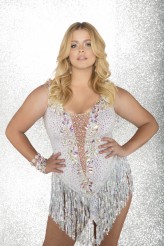 DWTS' Disney Night said bye-bye to Sasha Pieterse after she Rumba'ed her best dance of the season. 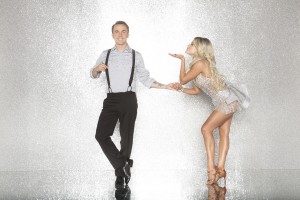 It’s Disney Night on DANCING WITH THE STARS: Season 25 and the costumes are colorful, the dances are extravagant and the couples are in high spirits! Some earned their best marks of the season and one couple – Jordan Fisher & Lindsey Arnold – earned the season’s first perfect score. There were more nines given out tonight than costume changes as the couples were swept into different worlds from THE LION KING to MOANA to COCO, Disney’s newest fare. Everyone seemed to be having a blast until the inevitable came and brought the party to a halt. Sasha Pieterse & Gleb Savchenko were eliminated at night’s end as Nick Lachey & Peta Murgatroyd held on for dear life and stayed in the competition, despite being at the bottom of the leader board again. Just missing a perfect score were Frankie Muniz & Witney Carson with 29 points and Lindsey Stirling & Mark Ballas with 28 points. We’ve reached the half way point. Next week nine couples compete, stay tuned!

Victoria Arlen (paralympic athlete) and her partner Valentin Chmerkovskiy
Cute! Inaba said they were completely in sync during the Jazz routine. Goodman said it had sparkle. Tonioli said it was joyous.
Scores: Inaba – 9, Tonioli – 9, Goodman – 9, Harland – 9

Who Went Home: Sasha Pieterse & Gleb Savchenko
Who Has Legs to Take Home the Mirror Ball: Lindsey, Jordan or Frankie for the win!