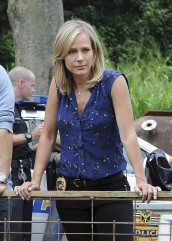 She also talks HAWAII FIVE-0 and the end of DEFIANCE 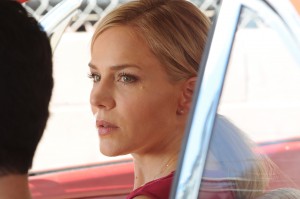 Julie Benz is at home on CBS these days. Last year, Benz wrapped up three years as heroic mayor/madam Amanda Rosewater on Syfy’s DEFIANCE, about a town where humans and extraterrestrials from a variety of planets made a sometimes fractious home for themselves. The actress is now in her second season of playing recurring character Inspector Abby Dunn on CBS’ HAWAII FIVE-0 on Friday nights, and on Thursday, February 2, she’s Holly McCabe in the premiere of CBS’ TRAINING DAY.

Denzel Washington won an Oscar for his portrayal of murderously corrupt LAPD Detective Alonzo Harris in the 2001 TRAINING DAY feature film. In the TRAINING DAY TV series, executive-produced by the film’s director, Antoine Fuqua, Harris may be dead, but his deeds have cast a long shadow over the department. Extremely upright cop Kyle Craig (Justin Cornwell) is tasked with keeping an eye on possibly corrupt, certainly unorthodox Detective Frank Rourke (Bill Paxton). Among Frank’s frowned-upon alliances is his ongoing affair with Benz’s Holly, who Benz describes as “a Hollywood madam.”

ASSIGNMENT X: You’re the love interest of a detective on TRAINING DAY. On HAWAII FIVE-0, you are a detective …

BENZ: Yeah. I’m a detective, the love interest of Chin Ho Kelly [played by Daniel Dae Kim]. It’s a lot of fun. That show is so much fun to be a part of.

AX: Had you gotten to work in Hawaii before that?

BENZ: No. Last year was my first time going to Hawaii ever. I’d never been to Hawaii. It was ironic, because I’d just wrapped DEFIANCE, and we had a really brutal year on DEFIANCE, shooting in the Arctic cold in the winter. And I got home, and I said to my husband [producer Richard Orosco], “I want to go to Hawaii.” And he’s like, “Babe, I can’t, I’m busy working.” And I was, “I’m going to Hawaii. I don’t know how, but I’m going to get there.” And all of a sudden, I got a phone call saying, “What do you think about doing HAWAII FIVE-0?” And I was like, “Oh, the universe, the universe heard me!” [laughs] And it was a great place to go and thaw out from the brutal cold of Toronto, and it was just a great place to be.

AX: How did you feel about the way DEFIANCE wrapped up?

BENZ: I have mixed feelings about it. There was an alternate ending that they didn’t show that we shot, that was very emotional and traumatic. Amanda got killed in the original ending while saving the town. She ended up dying. And then a couple weeks before the finale aired, they decided not to do that. So what was interesting was, I had my ending while filming on the show.

So I had my closure then, and it was great. I got a beautiful gift from the cast, and I got to say goodbye to everybody and all that. The rest of the cast, when a show doesn’t get picked up, and you’re not in production any more, you don’t have that final closure. So in many ways, for me, I got the best of everything. I got the gift, I got to be able to say goodbye to everybody, I made a beautiful speech for the crew and I got to toast everyone and thank them, and nobody else got to do that. But then there was word that it got picked up, and when they called and told me they were changing the ending, and I wasn’t going to die, my first question was, “Well, do I have to give the gift back? Because I don’t want to give it back” [laughs].

AX: Are you recurring on both TRAINING DAY and HAWAII FIVE-0?

BENZ: No. I’m a regular on TRAINING DAY and recurring on HAWAII FIVE-0.

AX: Have they figured out how your schedule works between the two? TRAINING DAY takes place in Los Angeles, presumably it shoots here …

BENZ: Yes. They’re working it out.

AX: Do you have a preference between playing a detective and a madam?

BENZ: You know, they’re both great [laughs]. There are pluses and minuses to both. I just love that in my forties, I get to play strong, powerful women that aren’t defined by their relationships to men, that are businesswomen that are smart, that are intelligent, that are detectives. For me, that’s what I look for in scripts. And to have two of those roles at the same time is a lot of fun. So I’m just very grateful, very blessed.

This interview was conducted at CBS’ party for the Television Critics Association press tour.