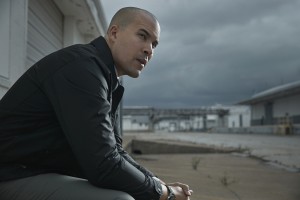 Fox’s new Monday-night drama THE GIFTED is an original series set in the Marvel Comics Universe. It has some mutant characters viewers may know from iterations of THE X-MEN, but it centers on some new figures, the Strucker family. Dad Reed (Stephen Moyer) is a prosecutor whose job it is to put away dangerous mutants – until the day he and his wife Kate (Amy Acker) find that their two teenage children, Lauren (Natalie Alyn Lind) and Andy (Percy Hynes White) have just demonstrated mutant abilities.

The Struckers go on the run from the mutant-hunting Sentinel Services, which is headed up by Reed’s erstwhile colleague Jace Turner, played by Coby Bell. Southern California native Bell had previously been a regular on BURN NOTICE, which was created Matt Nix, who also developed THE GIFTED. Bell’s other series regular credits include THIRD WATCH and THE GAME.

ASSIGNMENT X: Were you and Matt Nix in communication at all between BURN NOTICE and THE GIFTED?

COBY BELL: Yeah, we’ve remained friends ever since. And he told me about this project kind of early on. He was saying, “I would love to have you involved if we can make it happen.” It’s not completely up to him or completely up to me. And I said, “I would like to be a part of that.” Both of us looked at each other like, “Man, I can’t believe this worked out.” I still had to get through Fox, I had to get through Marvel, I had to do the whole auditioning process. So it’s hard for me to even express how excited I am to be part of this show, because this is exactly the kind of thing that I wanted to do, and it’s not very often as an actor that you get to do that.

BELL: I was not a comic book guy, but I was always into all the cartoons, all the movies, all the toys. I was always more into the toys than I was into [comic books], so I would make up my own stories. So growing up, doing this – it’s like a dream come true to do this kind of show.

AX: THE GIFTED is set specifically in the X-MEN universe. Did you watch or read anything from that?

BELL: You feel a responsibility to at least be familiar with the universe. We’re in our own galaxy, but in the X-MEN universe, you want to know the tone … We’re nerding out on ourselves.

AX: How do you see Jace?

BELL: I think he’s just doing his job. Jace Turner is a high-ranking official in Sentinel Services. The story is that he was a cop. His daughter was killed in a mutant-related incident. So then he joined the Sentinel Services to sort of make sure that doesn’t happen to any other family. So he’s coming at it [as though] he thinks he’s the hero of the story. He is not. I think down deep, everyone wishes they could just zap away injustice. Someone’s being a jerk. You’re like, “You know what? I zap you, jerk.” [laughs] I think that’s what everybody relates to when they watch these kinds of shows.

AX: Jace is an ordinary human with no superpowers. When you look at the rest of the show, are you like, “Rats, I feel outnumbered, being the only person without powers,” or are like, “Oh, good, I can act my way out of this rather than VFX my way out of this”?

BELL: You know what? In the very, very beginning, I was like, “Matt, we’re going to find out at some point, this guy’s going to have some powers?” He’s like, “No, dude. We actually know that couldn’t happen, because the Sentinel Services robots would have already detected you.” So I was like, “All right.” But now, the more we get into the series, I’m realizing how much fun I’m having being this guy, who is a normal human trying to figure out a way to beat these superhumans. It’s a lot of fun. They’re writing him as a real guy. I was a little worried that he would be more Sergeant Friday – “Just the facts, ma’am.” No, he’s a real dude, with real problems and family stuff. I’m having a blast playing the character.

AX: Is Jace in charge of his Sentinel Services unit?

BELL: I am, yeah. Whatever region we’re in, there are people above him, but as far as what goes on in the day to day show, he’s the head of the Sentinel Services.

AX: When you’re playing someone who’s in charge and saying, “Follow me, troops,” is that different than playing somebody who’s either being one of the followers, or off on his own completely?

BELL: It is, yeah, definitely. I guess it’s something you don’t really think of as an actor, but it just kind of happens, when you put on the uniform and you say the words that they give you, you kind of assume that power role.

AX: How much does that Sentinel Services uniform weigh? It looks heavy.

BELL: It’s actually not bad. It’s a fake bulletproof vest, and then he pretty much wears the same thing every episode, which I love. So I got my slacks, my little windbreaker, I’m good to go.

BELL: Oh, man. I’ve got to say, Matt has set it up perfectly. It’s got everything. It’s got all the superpower stuff that the comic book fans are going to want, it’s got the action, but it also has sort of the heart of being a family drama. They’re just a family on the run, trying to survive.