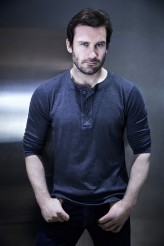 The star talks the TV reboot of the Liam Neeson film franchise, plus VIKINGS 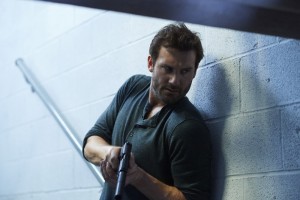 In NBC’s new TV series TAKEN, Clive Standen stars as Bryan Mills. Bryan Mills is, of course, that character with the skill set made famous by Liam Neeson in the TAKEN films. Executive producers Luc Besson and Alexander Cary introduce us to Bryan as a much younger and more vulnerable man, who rises to the occasion when he’s targeted by a drug cartel. This, coupled with Bryan’s response to a personal tragedy, bring him to the attention of a government agency run by Christina Hart (Jennifer Beals), who recruits him as an operative. These provide Bryan with the experiences that make him into the man we know from the movies.

Standen was born in Northern Ireland and grew up in England’s East Midlands. He’s had a variety of roles in film – notably EVEREST – and on TV has been a regular in CAMELOT as Gawain and VIKINGS as Rollo. The actor is happy to talk about what he thinks sets TAKEN apart from other action shows, and also previews where Rollo may be headed on VIKINGS.

ASSIGNMENT X: How did you become involved in TAKEN?

CLIVE STANDEN: I just moved agents, and they sent me ten scripts over a weekend. They said, “Read through these and start telling us what you want to do.” I saw there was a TAKEN script, and I went, “God, I don’t want to remake TAKEN. The whole unique selling point is the fact that Liam Neeson is older than all the bad guys, and if you take that away, it’s just going to be the same-old, same-old bulls*** that I have no interest in doing.” So when Monday came and my agent rang and they said, “How did you get on with those ten scripts?” “Yeah, yeah, they’re great.” “What did you think of the TAKEN one?” “I didn’t read it. It’s full of car chases and explosions, it’s not really my cup of tea.” And they went, “Well, that’s a shame, because we actually think it’s fantastic. Are you sure, because it’s written by Alex Cary, who wrote [for] HOMELAND. And they want to get on Skype with you and explore [the different aspects of the character].”

Which I’d always wanted to see. I’d seen it in films, I’d never seen it in TV, and what was attractive for TV is that you can do it over many hours. What makes all the facets of a seemingly heroic character? What’s the flip side of the coin? Because no one is that heroic. And I think Bryan Mills, because he’s an Everyman, on a very human level, you can actually pick him apart and think about, what did he sacrifice? Because you’ve already got the film, and it starts off with his daughter, he’s divorced, but he has this particular skill set. You want to know how he became that man and what ebbs and flows he had on the way, and I thought it was the perfect way – that it’s not an action hit. I have no interest in doing that. To be fair, I have some of the skills where I can do that, I have some of these martial arts moves and things like that, but I want to play human beings. I got into acting to draw attention away from myself, not towards myself, and I want to be able to explore what it is to be in these scenarios, and what sacrifices someone has to make.

AX: Is this your first American character?

STANDEN: I did a film earlier called PATIENT ZERO, I played an American colonel in the army, but yeah, this is the first TV show I’ve played where I’ve had to do a lot of work on dialects and keep that accent going for it.

AX: Do you have to do a different thought process to make the accent work?

STANDEN: No, I think to be fair, the British actors come over and do the American accents, but the only real key to it is, we start watching your amazing TV from an early age. But I’m not actually that great at some accents. I have to really put a lot of work into certain dialects within Britain – Scottish, Irish and things. But with American, I think I’ve just grown up watching American TV, and this is one of those accents that fits naturally. Gustaf Skarsgard, who I’ve worked with [in VIKINGS], is Swedish, and he does an amazing American accent, because he learned English with an American teacher.

There was a little thought that went through my head about making Bryan more Irish, because Liam Neeson plays it with an Irish-American accent, but I saw it more as a chance to reboot the franchise as well. I think when you look at the actors who play James Bond, no one tries to do a Sean Connery Scottish accent. That’s not James Bond. And Chris Pine in STAR TREK had no interest in [does William Shatner impression] talking like this to sound like William Shatner [laughs].

AX: Toronto had a major ice storm while you were shooting TAKEN up there. What was that like?

STANDEN: It was incredible. We had a three-day night shoot in Orangeville, two hours outside of Toronto, and they had a big helicopter stunt on the first day, and they couldn’t even get the helicopter up, because the roads were so freezing. So we had to change our whole schedule and we were in that barn [for a sequence where Bryan is physically restrained and undergoes an ordeal]. So I did all of that barn stuff on the first and second day, and then rain was turning to ice before it even hit the floor, so you were getting hit – this is not like hail, this is sharp rain, hitting you in the face. Everyone was pulling their parkas around their faces, which we [performers] couldn’t, because we were acting. And then when we finished, we finished about eight o’clock in the morning, everything looked like it was made of glass. It was the most beautiful thing I’ve ever seen. I remember the film THE ICE STORM with Elijah Wood, and it was just like that film. I didn’t know that really existed. And it’s like, how can something so beautiful be so painful? [laughs] You get out of the car and you take a picture, and you go, “Brrr …” That’s what it was like when I was tied up. I try and do everything I can [in terms of stunts].

AX: Are you still on VIKINGS?

STANDEN: I can’t answer that, but if you look in the history books, all the spoilers are there. Rollo goes on to be the Duke of Normandy and the great-great-grandfather of William the Conqueror. He’s had his children in Season 4, but who’s to say?

AX: What would you most like people to know about TAKEN?

STANDEN: Like I said earlier, when they wanted to Skype me, I was really reticent until I’d read the script. I wanted to do something different with this. I think life is interesting enough as it is, I don’t think we need to put a veneer on it, we don’t need to gloss over it. And I think a lot of these action shows, everyone looks perfect, everyone is pretty, and people jump through explosions, they get back up and they carry on going. TAKEN is not like that. I’m trying to change the genre a little bit within my character and within the power I have within the show to make it real. I think people should wake up in the morning with messy hair and have eye bogies. I think when people get shot, they should bleed; when people get punched, they should bruise; you get hit by a car, it hurts. And you will see that on the screen. I think it’s about time we play life as it really is. That’s the only interest I have in playing this. And if people don’t want to see that, and it crashes and burns, then at least I’ll say I tried to do something, but I have no interest in doing the same old bulls*** and people just go, “It’s the same old bulls***” and then it gets canceled [laughs].

This interview was conducted during NBC’s portion of the Winter 2017 Television Critics Association (TCA) press tour at Pasadena’s Langham-Huntington Hotel.