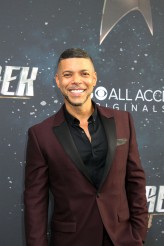 The actor talks the series and his work with GLAAD 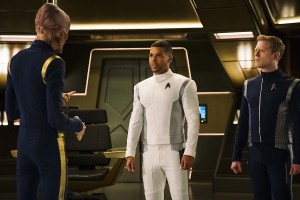 Cruz, a native of New York City, started his career playing another gay character, series regular Rickie Vasquez on the cult hit MY SO-CALLED LIFE. Other major credits include arcs on PARTY OF FIVE and THE WEST WING, a starring role in THE RED BAND SOCIETY and a supporting turn in Netflix’s 13 REASONS WHY.

When GLAAD (originally the Gay & Lesbian Alliance Against Defamation; the acronym was preserved when the organization’s mission statement was expanded to include bisexual, transgender and queer representation) holds a panel at the Summer 2017 Television Critics Association (TCA) press tour to discuss LGBTQ portrayals in the media, Cruz is one of the panelists.

Following the Q&A, Cruz takes time to talk more about both GLAAD and his work on STAR TREK: DISCOVERY.

ASSIGNMENT X: Are you excited about being on a STAR TREK series?

WILSON CRUZ: The ten-year-old boy in me, his head is exploding. The minute the deal closed and it was happening, I was with my brother and I cried a big old bucket of tears. 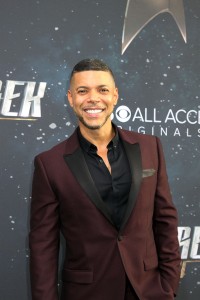 AX: Are you particularly excited about getting to play one of the first gay regular characters in the STAR TREK universe?

CRUZ: Anthony’s the first regular character. I’m his partner. I am excited about being part of that relationship, yes. I know how long people, especially fans of the franchise, have been waiting for this, and to be a part of that is mind-boggling to me. I’m gobsmacked [laughs].

AX: Can you say if you’re playing a human?

CRUZ: Yes. Anthony and I are both human. So I don’t have long hours in prosthetics [laughs].

AX: How are you dealing with the people who are playing long hours in prosthetics?

CRUZ: We honor them.

AX: Do you just see them as their characters, or do you feel like, “I feel so bad for you, that looks really uncomfortable”?

CRUZ: I’m in awe. Doug Jones [who plays Kelvien Discovery officer Saru], he’s done this for years, and he’s amazing – he doesn’t complain, he sits there and gets it all done. Ken Mitchell [who plays the Klingon Kol], also. Anyone who plays a Klingon has to undergo many hours, so we have deep respect for them and what they have to go through in order to do it.

AX: As far as the panel you just were part of, how do you feel GLAAD is as a representative body for GLBT representation? Do you feel that there need to be more organizations like them?

CRUZ: Well, I worked at GLAAD and was a national spokesperson for them for two years and have a long history with them. So for me, they are the epitome of what an advocacy organization should be, especially in terms of media. Many other diversity groups look to the way that GLAAD has done their work through the years to model their own work. So what I love about GLAAD is that they work directly with the media. They offer themselves as a tool, and as a guide to how to speak about LGBTQ issues, how to better their own work as far as productions and producers and writers.

I think the work that they do behind the scenes is invaluable. So much of the work that the organization does is behind the scenes, stuff that we don’t even get to hear about. But they’re tough when they have to be, and they’re helpful when they can be. let’s not forget that they’re a non-profit, and if you believe in their work and if you believe that we need to see more LGBTQ representation in media, then they deserve your support.

CRUZ: First, as far as STAR TREK is concerned, this cast and this crew and all of the writers and producers are so completely and utterly committed to what STAR TREK has always been to people, which is this ideal of multicultural diversity, and how important that is. We understand that if we are going to do better as a species, we’re going to have to learn how to depend on each other. And that’s what STAR TREK has always said, and I think that message is more important now than ever.