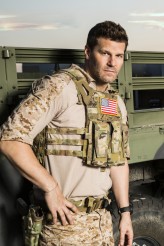 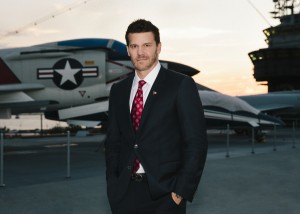 SEAL TEAM, CBS’ new Wednesday-night military drama, has been picked up for a full season. David Boreanaz stars as Jason Hayes, leader of an elite U.S. Navy Tier One squad that flies to hot spots all over the world to rescue and otherwise protect Americans.

Executive producer Christopher Chulack is the directing producer on SEAL TEAM, supervising the directors on the episodes he doesn’t helm himself. Chulack has an extensive background in television action/drama and even comedy, with a career that includes THIRD WATCH, ER, SOUTHLAND, LONGMIRE, SHAMELESS and ANIMAL KINGDOM.

When CBS brings a group of press to visit the soundstage containing the interior set for the SEAL TEAM transport aircraft, Chulack is among the group of producers and cast ready to discuss the series.

ASSIGNMENT X: Is this the size of an actual SEAL Team plane, or is it widened to accommodate camera and lights?

CHRISTOPHER CHULACK: Well, of course. I don’t know if it’s exact, but it’s pretty close to the size of a C-117.

AX: Were you looking for the opportunity to do something of this enormous scale on a week to week basis?

CHULACK: No. I wasn’t looking for it. Me and Mark Owen wanted to do a project together. Through a lot of machinations, we wound up here. If you’re going to do a show about a SEAL team, you’re going to have to do it to this scale.

AX: Were you involved in the casting?

CHULACK: David Boreanaz actually passed initially. He was on the list, and he had just come off of BONES, and I don’t think that he was sure that he really wanted to do another show. And through a confluence of a lot of extenuating circumstances, he showed up.

AX: Who were some of your other big choices?

CHULACK: Well, certainly Max Thieriot, Neil Brown, A.J. Buckley, Jessica Pare. They’re all big choices, because they’re all part of a team. The theme of the show is team.

AX: Kind of a tweaky question, but there is a dog on the team, who is “played” by a former real-life police dog. Is it difficult working the dog in, or is she a good actor?

CHULACK: [laughs] The dog’s a great actor. This dog is a working dog, and she’s terrific.

AX: You are wearing a Stunt Association jacket right now. Do you come from stunt background?

CHULACK: No, I come from a producing/directing [background], but stunts are a big part of it, so I’m sort of honoring our stunt coordinator, Peewee [Piemonte].

AX: Without getting spoiler-y, can you tease any big stunts that are coming up?

AX: When your SEAL TEAM military advisers are talking to you, do they actually draw things for you, or do they just tell you verbally?

CHULACK: We’ve had those conversations, definitely, because you have to visualize it. We look at training films, so that the actors can see the body language, and we actually have some of the SEALs reenact it for them, so the performers can, in first-person, see how it looks.

AX: Do you rely a lot on your military technical advisers?

CHULACK: I think it’s unprecedented, the level at which our guys entered this project and built it. They’re part of the DNA, totally embedded. We learn how to move like the SEALs move. We [learned] subtextual very small things we do that come out on screen. The aggregate is that the show, I think, looks different than any other military of police show I’ve ever done. Thank you, CBS …

AX: Do you think the series SEAL TEAM promotes a particular idea of patriotism?

CHULACK: We’re not messaging. This is a story about the study of the psyche of the men and women who are involved in these situations, so it’s not politics, it’s human study. That’s character study. That’s what we’re trying to do with a big backdrop.

AX: And what would you most like people to know about SEAL TEAM?

CHULACK: As I said, it’s a study of the psyche of these men and women who are involved in this process, and how it affects them. It’s a little bit of a look behind the curtain of how they work, something that we’ve never really done.