©2014 CBS
The cast of SCORPION
Interviews 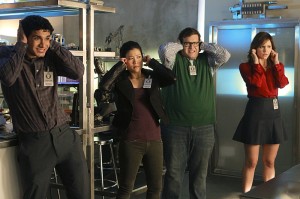 In Part 2 of Assignment X’s exclusive interview with SCORPION stars Elyes Gabel, who plays Walter O’Brien, and Ari Stidham, who plays Sylvester “Sly” Dodd, the two actors talk about stunts, fake bats and more in the CBS series, which airs Monday nights and returns for its fourth season in the fall.

ASSIGNMENT X: Stunt-wise, what are some of the things they’ve allowed you to do that you’ve enjoyed the most?

ELYES GABEL: Yeah, there are so many, through each single episode. We did a lot of wall work again, there are some things that I didn’t enjoy doing, but there are a lot that I really did enjoy doing. And also, the stunt [coordinator] Jim Vickers, his son Sean Vickers is my double and [his stunt company does] a great job. I always enjoy driving cars, actually. There’s an episode Don Scardino directed where I drive this souped-up s***-wagon, basically. The only cars that I drove up until a certain point were really s***-mobiles, but this was a car with a carburetor, and they had a camera in the back, and it was a drag race, basically. And I liked doing that. I like driving. I like doing running, diving – very physical.

AX: Walter gets a lot of cool cars …

GABEL: They established pretty early in the first season that’s Walter’s catharsis, in a way. In that algorithm episode, where he clears his mind because he’s focused on one thing, rather than a load of different things nagging him. And actually, recently, I was forced to tell people that even though other people [sometimes] drive the car, Walter’s a quick driver. He’s a guy who races for slips, right? And I love it. I’d love to drive the car more [laughs].

AX: There’s an episode where Walter falls out of a spacecraft within Earth’s atmosphere. Were you on wires for that?

GABEL: It was a mixture, actually. Whilst I was inside the spacecraft, when we had the zero gravity aspect of it, I was in a harness. I was pretty much in a harness with different types of harnesses. So it aided different parts of mobility of my body. When I was allowed to move a little bit more in relation to the background, I was on a harness, but a harness with cables attached, so that you had different truss points. When I first start rising out of the seatbelt, I sort of rise, and then I jump down, so I kind of encourage my body weight and velocity to jump down. So I was on cables on the harness. But when I was free-falling from the sky, coming from zero gravity into gravity, that’s when I was completely harnessed and they were moving me. So I had no mobility.

AX: Have you had to go up on a harness for anything on the show?

ARI STIDHAM: I have. I was on a harness for the episode where we went into the bat cave. I had to get hoisted up to get one of the bats. Cabe [played by Robert Patrick] was hoisting me up on the pulley. It’s funnier for a big guy to go up. [laughs] Yeah, that was the only time I’ve been harnessed. It’s painful.

GABEL: How long were you in it for?

GABEL: [laughs] We have a very diligent and courteous stunt unit on our team, supported by [stunt coordinator] Jim Vickers and a lot of the people that he worked with.

GABEL: In the first two seasons, I was in the harness nearly once every two episodes at least, for a long time, and that, coupled with I suppose the work hours, became kind of an issue. So they’ve managed to get it down to a nice little science now, where we try to shoot out [the harness work all at once], rather than keeping the guy in the harness the whole time. It’s almost like the evolution of the show. You have to work out stuff that’s really abnormal at the start, but it’s part of the world that we live in.

AX: With the bats in the cave, did you have actual bats, props, or CGI?

STIDHAM: I believe it was props and CGI. I never saw a real bat. Did you ever see a real bat?

STIDHAM: I have seen a real bat, but I did not ever see one on set. We have a great effects team, a great VFX team –

STIDHAM: They did some pretty cool stuff.

GABEL: Yeah, we have a fantastic effects team. They’re as permanent a fixture as any other fixture in the show. I’ve been fortunate to sit in on the meetings in terms of the prep and tech, and they almost design the vista or the backdrop for how we’re going to play in the scene. So they’re very integral in terms of working out where we go to. Because sometimes, if you’re shooting in the background, if you’re shooting against high light, there’s a thing called rotoscoping, where they have to literally shade out bits of what-have-you, so they can erase cables, or things that shouldn’t really be in the shot. So sometimes they’ll say, “Listen, we can’t light that.” So not always, but a lot of the time, with heavy CGI-laden scenes, they have a very powerful voice in terms of what the backdrop is and how they shoot.

AX: With something like the bats, do they just say, “Okay, look up, there’s a bunch of bats, we’ll add them in post-production,” or do they shoot something like a volley of ping-pong balls over your head so you have something you’re looking at?

STIDHAM: There were a couple of string bats that I believe were made out of nylon. I don’t know if there were real dead bats – that would be scary.

STIDHAM: We used whatever the industry standard, I think.

GABEL: Sometimes you can get away with it, sometimes there’s just no other way to shoot something, apart from having something that’s some form of a plastic thing, and then hanging it down onto a fiber wire, which you can really easily rotoscope out as well. I know it sounds really archaic, but that’s actually the best way to do it sometimes with these small things, where it doesn’t require a lot of money to frame out.

STIDHAM: You frame out the stuff …

GABEL: And then you get a shot of them really, really quickly waving by. You’re like, “Was that a real bat? That was probably a real bat.”

STIDHAM: And then when there are shots of real bats, there’s a second unit shooting a real bat. So we never had to have a real bat. I don’t want to talk too much more about the episode without saying our construction department built all of those bat caves inside of the stage, out of I don’t know how much Styrofoam, and it took them six days, maybe, they worked nonstop, and definitely made that episode sing. We all work on top of each other. Everybody can see where the pieces are falling.

GABEL: They do an incredible job. The construction guys, the art department, they are without a doubt some of the hardest-working people on the show. Because they get the job done, day in, day out. The schedule doesn’t stop shooting. So we start one day, we finish out at eight days or nine days, giving the weekend, but still eight days or nine days after, and they’re still working on getting a script, and looking at the geography, the nature, the narrative. So whatever it is that’s inside, they’re trying to create for the next episode. And then they’re looking ahead, because sometimes when the story doc [the document of the episode’s outline] comes out, which is even before the script, they’ll be looking at it, because they know they have to create something for the episode after. But also, it means they have the same amount of people split across the next episode, and then the episode after. So they do a fantastic job, incredible.

STIDHAM: We did do that episode, Djibouti. I mean, I prefer staying in L.A. on the show. I think it’s cool to have a show that solves L.A. problems. But I’m an L.A. native, so I could just be biased. I do love the rest of the country. I know Los Angeles, so I understand – it’s more real to me. 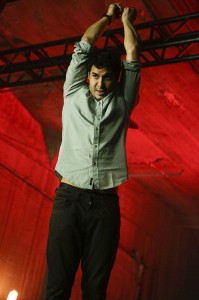 GABEL: Right, right. I did think when you said, “L.A. people, and L.A. people and L.A.-based problems,” I was just thinking about how obviously there are extreme situations for L.A. people to solve [laughs], but, “There’s not a cinnamon latte! Call Scorpion!”

STIDHAM: [pretending to be offended] I resent that, Elyes.

GABEL: Let’s figure out how much cinnamon we can get into one [laughs].

STIDHAM: I resent that. That is not the only L.A. problem [laughs].

AX: When water begins falling from the sky, the entire population of Los Angeles seems to forget how to drive …

GABEL: There we are. There’s a slip ‘n’ slide. Although you make a really good point about water, the aqua-verse, we have a lot of episodes that are about water, but I think drainage and drought we haven’t really done an episode about.

STIDHAM: Drainage, drought, desert. Part of Los Angeles is a desert. You go up to Yucca Valley, snakes …

AX: What’s the farthest they’ve sent you in Southern California in terms of location?

STIDHAM: Acton, California I believe is the furthest we’ve gone.

GABEL: Ontario is probably the furthest, or Pomona. It’s one of those. For a location show that’s based in L.A., and for saying, we might be shooting back in the stages the next day or the day after, we definitely stretched it. Newhall is maybe about an hour away, but really far out. What about the first season, the Vegas episode? Do you remember when the helicopters swarmed?

STIDHAM: It was my twenty-second birthday.

STIDHAM: You know what? That was in Acton.

AX: How do you like the Comic-Con experience? Once SCORPION was established, that is.

GABEL: It’s mad. The separation from first season, when we went there, when we were trying to introduce it to people’s minds, to the second season – the Comic-Con fans are an exceptional bunch of people, because they really live for the people on the shows, and I think it’s a real celebration of TV that people like. And to see up close and personal all these people enjoying it, and asking questions that are really true and honest, it’s actually really much more inspiring than a lot of the other press that we do, for me. You get to see people, you see little kids enjoying themselves, asking questions and taking pictures, it actually gives something to me. It’s a really positive thing for me to know that there really is that true enjoyment for the show. It’s fantastic. There’s nothing like it.

AX: Your costar Robert Patrick must have done a ton of Comic-Cons at this point …

GABEL: That guy, God bless him, he’s a trouper.

GABEL: Now I’m concentrating my efforts, just because of how intense the work schedule is on this show, trying to come up with a couple of ideas I’ll be writing. And the music is going to actually happen. I’m going to record a brief EP, it’s going to be stripped down, and then I’m going to do some live playing.

AX: And what would you both like people to know about SCORPION right now?

GABEL: It’s fun, it’s bigger, we save the world a few times, we save people, we save people that save us from ourselves – I think that’s the running thing – it’s good.