Home » Thank You For Your Service Movie Review 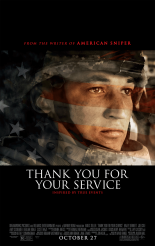 ©2017 Universal Pictures
THANK YOU FOR YOUR SERVICE movie poster
Reviews

Movie Review: THANK YOU FOR YOUR SERVICE 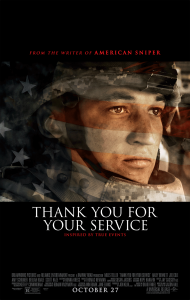 THANK YOU FOR YOUR SERVICE movie poster | ©2017 Universal Pictures

THANK YOU FOR YOUR SERVICE takes its title from the phrase commonly uttered to U.S. soldiers home from the war. The film, based on a nonfiction bestseller by David Finkel, follows several U.S. Army Iraq War veterans as they return home to Topeka, Kansas in 2007.

While a number of other veterans and their families figure in THANK YOU FOR YOUR SERVICE, the film settles primarily on Lieutenant Adam Schumann (Miles Teller) and Specialist Tausolo “Solo” Aieti (Beulah Koale), coming home after serving together over multiple tours of duty. Neither man is badly wounded physically, but it doesn’t take us long to see the psychological scars. Adam is happy to be back with his wife Saskia (Haley Bennett) and their two young children, but he’s overwhelmed with guilt about what he perceives as failure with his comrades. Solo would like nothing better than to return to the front, but his memory problems make another deployment unlikely.

Writer/director Jason Hall (who makes his directorial debut here after writing the screenplay for AMERICAN SNIPER; he has also been an actor, with an arc as singer Devon in BUFFY THE VAMPIRE SLAYER) does a canny job of treading a particular tightrope. THANK YOU FOR YOUR SERVICE is continually compelling, at the same time that it avoids big plot arcs. It’s a dual character study, with Adam and Solo on their sometimes joint, sometimes separate journeys toward recognizing that they need help, and then trying to obtain that help. Hall draws us in by giving us relatively low-key human beings with troubles that we can empathize with, even if we’ve never been in their situations.

THANK YOU FOR YOUR SERVICE is a bit sketchy on some details. While Adam’s wife Saskia is written with backbone and played with verve by Bennett, she’s depicted as verging on sainthood. We learn even less about Solo’s wife Alea, played with warmth by Keisha Castle-Hughes. Granted, the film is about the veterans and not their spouses, but it seems like there could be a bit more detail on the domestic front.

While THANK YOU FOR YOUR SERVICE is absolutely neutral on the subject of what the U.S. was doing in Iraq, the Veterans Administration comes in for some passionate criticism. It seems the definition of unfairness that people like Adam and Solo are asked to put their lives, marriages and sanity on the line, then come back to neither psychiatric help nor even general funds from the government. Adam accepts this somewhat philosophically, Saskia seethes and the film makes its case that this is unacceptable.

THANK YOU FOR YOUR SERVICE is based on the nonfiction book of the same name by David Finkel. While the film centers on Adam and Solo, we also see how several of their peers are coping, or not coping, with the after-effects of combat. We also see the toll it can take on family members; Amy Schumer is striking as a widow who is profoundly unsettled by not knowing the specifics of her husband’s combat death.

Teller makes us believe that Adam is a good man and a thoughtful one, although he is mightily conflicted. Koale conveys a kind of helpless innocence as Solo, who is lost without his unit’s regimentation and camaraderie. Bennett is a standout.

The movie tips into a little standardized storytelling toward the end, though even this is generally credible. There’s a sense that THANK YOU FOR YOUR SERVICE wants to be wrenching. It doesn’t quite achieve this, but it’s continually intriguing and is overall persuasive and done well. It ends with a plug for a California-based agency that helped some of the real people shown in the film, thepathwayhome.org, which may be useful to those who have walked the paths of soldiers like Adam and Solo.