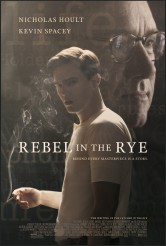 Movie Review: REBEL IN THE RYE

A clear-eyed look at J.D. Salinger and the creative process 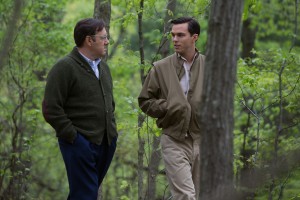 Writing is a solitary activity that, unlike some others (bicycling, mountain climbing, even painting), is extremely difficult to make watchable. In bringing the early life of CATCHER IN THE RYE author J.D. Salinger to the screen, REBEL IN THE RYE writer/director Danny Strong deftly surmounts the challenges of the subject matter. Inspired by Kenny Slawenski’s biography J.D. SALINGER: A LIFE, Strong gives us powerful character drama underlined by some excellent philosophical questions. What is the ultimate goal of writing? What is the ultimate goal of anything? If the activity isn’t an end in itself, can it ever be satisfying? And if the activity is an end in itself, what about the other things, both good and bad, that it may bring?

When we first encounter Jerome “Jerry” David Salinger (Nicholas Hoult) in REBEL IN THE RYE, he proclaims in a letter to his mentor, “Holden Caulfield is dead.” Holden Caulfield as most people know him doesn’t exist yet, because Jerry, still a young man, hasn’t written CATCHER IN THE RYE. He’s in a psych ward suffering from PTSD brought on by his battlefield experiences in World War II. REBEL moves us backward and forward in Jerry’s life. His father (Victor Garber) wants Jerry to follow in his business footsteps, but Jerry’s mother (Hope Davis) believes in her son’s writing aspirations. Jerry finds a mentor in University of Columbia professor Whit Burnett (Kevin Spacey), who at first doesn’t want to let on how impressed he is by his student’s abilities. It’s not so much that Jerry needs advice about writing, but more that he has to be taught how to handle rejection. Following the war and the hospital, Jerry at last writes a novel, but he is no longer the same person who yearned for success at the start of his career.

The environment is immersive and the story is engrossing, even though neither filmmaker Strong nor actor Hoult tries overly hard to make Jerry sympathetic. He is self-absorbed, not especially interested in the internal lives of those around him, and extremely unforgiving of perceived slights, saving all of his insights and compassion for the people on his pages. However, and this is what makes Jerry someone worthy of our attention, he recognizes that he can learn from those around him. In a more conventional biopic, there would be someone trying and failing to bind Jerry to the world, but Whit winds up battling his own demons, and Jerry’s agent Dorothy Olding (Sarah Paulson) doesn’t do what might be expected. But because the issues are all valid and the answers are never pat, we remain consistently invested in Jerry’s singular journey.

REBEL IN THE RYE also conveys a powerful sense of period, courtesy of Dina Goldman’s production design and Kramer Morgenthau’s cinematography. Simply looking around tells us a lot about what is shaping Jerry into the man he becomes.

Hoult embodies Jerry in all his contradictions: self-doubt and conviction, indifference and susceptibility. Spacey is affecting as Whit, and Paulson’s Olding is the agent anyone in need of representation would like to have.

REBEL IN THE RYE is a revealing look at J.D. Salinger, but more, it is an uncommonly clear-eyed look at why creative people do what they do, and how they go about it.