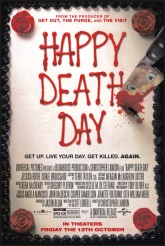 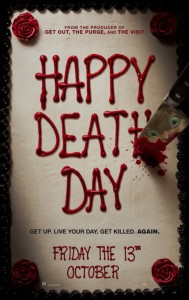 GROUNDHOG DAY isn’t the only tale of someone stuck reliving the same day over and over, but it’s perhaps the best-known in pop culture. Also, it’s the one that gets eventually name-checked in HAPPY DEATH DAY, so it seems appropriate to use that 1993 comedy as a reference point.

HAPPY DEATH DAY has, as its basic premise, GROUNDHOG DAY redone as a PG-13 college-set slasher flick. Let’s set aside for a moment the issues with PG-13 slasher movies (we’ll get to them) and just consider the idea of a horror movie in which a character relives the day of their murder over and over, trying to figure out what’s happening in a way that will allow them to survive. It’s a concept that has merit.

Besides that seminal notion, HAPPY DEATH DAY has going for it what may be the most annoying mask in the annals of concealed-identity serial killer cinema. The face of a giant, one-toothed baby is not only creepy but actually infuriating – we want to punch it even before its wearer starts wielding a knife. It’s a little hard to accept that this is the image the college has adopted as its mascot, but even institutes of higher learning do strange things sometimes, so that can be borne.

Leading lady Jessica Rothe as beleaguered protagonist Tree Gelbman is attractive and also proves versatile as the character goes from being a truly appalling caricature of a mean sorority sister to something approximating a decent human being.

Herein lies HAPPY DEATH DAY’s first big problem. Our first go-round with Tree is on her birthday, which begins with her waking up hung over in the bed of nice-guy college student Carter (Israel Broussard) and no memory of how she got there. The movie proceeds to convince us that Tree is such an awful person – she’s horrible to everyone she encounters, from Carter, to one-time date Tim (Caleb Spillyards), to her sorority president Danielle (Rachel Matthews) to her gentle roommate Lori (Ruby Modine) – that she seems over-qualified to be the character in a standard slash flick who we are not meant to mourn. It doesn’t help when we realize that we’re apparently meant to judge her for being in Carter’s room, and judge Carter for having her there.

Yes, HAPPY DEATH DAY is trying to create a wide-open field of suspects. By the end of the first evening, it’s easy to understand why people would want to kill Tree. The thing is, while we don’t seriously wish her dead, we also don’t want to spend time with her. There isn’t some spark of humanity we can detect and root for to grow. Tree learns from her experiences in terms of where to go and what to do as a practical matter of trying to thwart her stalker. However, she just starts being nicer because the script by Scott Lobdell is dictates that she does, rather than because Tree has significant interactions that cause her to think of others’ feelings. It’s not actual character development, just a change in behavior.

Then there’s the matter of the mythology. If the movie is a straight-up comedy, it can get away with simply resetting the timeline as an unexplained phenomenon. In a horror movie, even a horror comedy, when the day continually resets to one with a hooded, masked serial killer on the loose, there either should be a good reason for it, or an even better reason not to provide an explanation. We get neither.

To be fair, HAPPY DEATH DAY is good in mystery terms about laying in clues as to the killer’s identity and as to why Tree is targeted. But the movie doesn’t mix its horror and its comedy well. Director Christopher Landon and writer Lobdell don’t seem interested in sending up horror tropes, a la any number of other horror comedies (AMERICAN WEREWOLF IN LONDON, SHAUN OF THE DEAD, FINAL GIRLS, etc.). The stalking is competent but not terrifying, and the jokes seldom rise to the level of being funny.

Then there’s the PG-13 aspect. Given the extremes HAPPY DEATH DAY wants to bridge, R-rated gore wouldn’t serve its purposes, but it still has that sanitized, abbreviated, not-really-serious texture that affects a lot of PG-13 slashers.

As horror and audience-solved puzzle, HAPPY DEATH DAY is competent. As comedy, it is less so. It certainly isn’t a film most people will want to revisit over and over.