The performer talks about playing the possibilities in a murder suspect 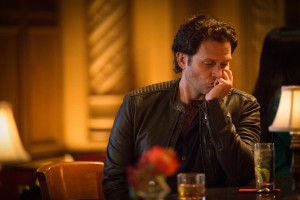 In CBS’ new Wednesday-night drama DOUBT, Steven Pasquale stars as Dr. Billy Conway. A hero in the hospital, Billy stands accused of a twenty-six-year-old murder. His lawyer, Sadie Ellis, played by Katherine Heigl, is convinced of Billy’s innocence. Despite warnings from friends and associates, and the legal implications, counselor and client fall hard for each other.

Pasquale previously played Mark Fuhrman in the Emmy-winning THE PEOPLE V. O.J. SIMPSON, starred as the Jekyll/Hyde-like protagonist in DO NO HARM and was a regular on RESCUE ME. Additionally, the actor from Pennsylvania has an extensive stage career, including the original Broadway productions of Neil LaBute’s REASONS TO BE PRETTY and the musical THE BRIDGES OF MADISON COUNTY.

ASSIGNMENT X: What was the pitch to you for DOUBT? What did they tell you about the character of Billy?

STEVEN PASQUALE: Well, my guys called me and said, “You would represent the person who is on trial for the entirety of Season 1, and it’s all about whether he’s guilty or innocent with regard to a twenty-year-old murder.” And that was very compelling to me. But ultimately, I said, “Just let me read the script. If it’s good, I’m interested, if it’s not good, I’m not.” That’s kind of how I enter all those conversations.

PASQUALE: I don’t, no. I just play him one way in my mind, and hopefully it will be the right way.

AX: How much does it matter to you as an actor to know at some point if he’s guilty or innocent, or does it help to just play him as if he’s innocent?

PASQUALE: I think no matter what they decide to do, I think it helps to play him as if he’s innocent. If he is innocent, obviously, that’s compelling, and if not, then he’s a very successful, very skilled human on a personality level.

AX: Why do you think Billy is taking the risky step of getting romantically involved with his lawyer?

AX: And she is very attractive …

AX: How does it feel to be the one series regular on DOUBT who’s not playing a lawyer?

PASQUALE: So far, I really like it, because when you shoot in a courtroom, it’s an incredibly long day, because you’ve got to get a million different angles. So thus far, I’ve been able to avoid that. But of course, Billy’s case is pending, so I’ll end up in the courtroom with everyone soon.

AX: Do you enjoy courtroom dramas as a genre?

PASQUALE: Sure, if they’re good. All that matters is the words. So if the writing is good, I’m interested.

AX: Do you know if there any side cases relating to Billy’s medical practice?

PASQUALE: Yes, absolutely. That happens right out of the gate.

AX: You’ve been the lead in some projects, and part of an ensemble in others. DOUBT is an ensemble piece. Obviously, you get more screen time if you’re the lead, but are there advantages to being in an ensemble?

PASQUALE: Oh, the workload. The workload is a lot less stressful. When you carry a series, you’re working really long days every day, and that’s hard. So from a quality of life standpoint, an ensemble show is actually a much better situation.

AX: You were asked whether you had been hounded for tickets to HAMILTON. Why would people think you could get them HAMILTON tickets?

PASQUALE: My girlfriend was in HAMILTON [Phillipa Soo played Eliza Hamilton through July of 2016 and is about to appear as the lead in the musical AMELIE, opening in April]. I’ve been a constant source of [inquiries from] people wanting tickets to HAMILTON.

AX: You’ve gotten to see it?

PASQUALE: Yeah, I’ve seen it more than anyone. It’s the most brilliant piece of art anyone’s ever seen. It’s amazing.

PASQUALE: No. Tons of stuff sort of cooking and in development and in the theatre world, but DOUBT is next on the docket.

AX: And what would you most like people to know about DOUBT?

PASQUALE: Tune in. It’s great. It’s going to be a great hybrid between a classic law procedural and a cable-caliber serial anthology.