The actor also discusses directing episodes for the CBS series

CRIMINAL MINDS, CBS’ Wednesday night procedural drama about the F.B.I.’s Behavioral Analysis Unit, has now been on the air for twelve years 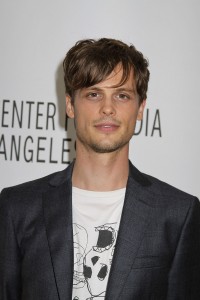 and remains a Neilsen Top 20 hit. However, Matthew Gray Gubler is one of only two cast members who has been with the series for its entire run; the other is Kirsten Vangsness.

Gubler’s character, Dr. Spencer Reid, is brilliant, with a facility for remembering literally everything, though like many geniuses, he’s a little socially awkward. This season, he’s been dealing with the mental deterioration of his mother, played by Jane Lynch, and a stint in a Mexican jail after he’s framed for murder.

Gubler started his onscreen career in a small role in Wes Anderson’s film THE LIFE AQUATIC WITH STEVE ZISSOU. Given that the Las Vegas-born actor has spent much of his career playing an F.B.I. agent who tracks serial killers, it is arguably ironic that Gubler has been in a couple of movies about serial killers, including I’M NOT A SERIAL KILLER, EXCISION and TRASH FIRE, as well as the zombie comedy LIFE AFTER BETH. At the other end of the spectrum, Gubler also voices the singing rodent Simon in the ALVIN AND THE CHIPMUNKS movies. Other credits include (500) DAYS OF SUMMER and BEAUTIFUL GIRL.

As a director, Gubler has helmed the music video DIRT SLEDDING for The Killers and multiple episodes of CRIMINAL MINDS. At a party thrown by CBS for the Television Critics Association (TCA) press tour, Gubler talks about that and more.

ASSIGNMENT X: Is directing something you want to do more of, outside of CRIMINAL MINDS?

MATTHEW GRAY GUBLER: Yeah. That’s what brought me to L.A. initially. I had studied directing in college, then moved to L.A. to be a director.

AX: So how did you wind up acting? Was that just to pay the rent?

GUBLER: Yeah. My directing agent said, “Oh, hey, there’s a TV show that’s casting, and there’s an eccentric character on there that kind of reminds me of you, why don’t you go audition? You probably won’t get it, but it’s a great opportunity.” And I’ve been on that show for twelve years now.

GUBLER: I was naïve enough to think it would. But I knew very little – and now I know even less.

AX: How would you say Spencer has evolved from where he’s started to now?

GUBLER: He’s gotten a tiny bit more confident, and that’s about it.

AX: How do you feel about all of the cast comings and goings? Over the years, Lola Glaudini, Mandy Patinkin, Shemar Moore, Jeanne Tripplehorn, Rachel Nichols and Thomas Gibson have left, Paget Brewster and A.J. Cook left but came back, and now you have Adam Rodriguez and Damon Gupton as new regulars …

GUBLER: It’s very much like real life. People sort of come into your life and out of it, but they stay forever as friends, and it’s a little bit like that.

AX: And Aisha Tyler has been promoted from a guest star to a regular?

GUBLER: Yeah. Aisha’s a regular now, and it’s great to have her, I love her.

AX: Do you know how many episodes of CRIMINAL MINDS you’re directing this season?

AX: Is CBS letting you direct episodes of other things, or are you too busy with CRIMINAL MINDS?

GUBLER: CRIMINAL MINDS dominates ten months of my year. And then I try to spend the other two months working on my own personal projects. But yeah, I’m working on a feature film.

AX: As a director?

GUBLER: Yeah. [As an actor], I shot a new movie in New Orleans called 68 KILL that I’m really excited about. It’s been great.

AX: How is working in New Orleans compared to working in Los Angeles, where CRIMINAL MINDS shoots?

GUBLER: A dream come true. I love the South, I’m a Southerner at heart. I love the food and the friendliness and I had a great time there.

AX: What about the heat?

GUBLER: I don’t mind it. I’m from Las Vegas. It was kind of cold for me.

AX: And what would you most like people to know about Season 12 of CRIMINAL MINDS?

GUBLER: It’s going to be another spectacular year, filled with intense drama and wonderful writing.