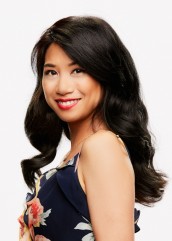 The actress talks about her New York apartment set series 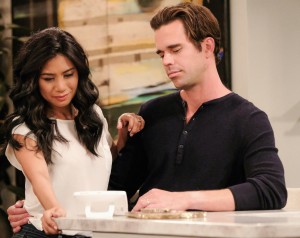 In CBS’ new Top 20 Monday night comedy 9JKL, Mark Feuerstein plays Josh. Feuerstein created the series with his wife Dana Klein, based on a period in his life when he lived in a New York apartment with his parents next door on one side and his brother and sister-in-law on the other side.

ASSIGNMENT X: On COOPER BARRETT and TRAFFIC LIGHT, you played a supportive wife. Is Eve another supportive wife, or is she a different sort of character?

LIZA LAPIRA: I’d say she is supportive, but she’s vastly different, because of the culture of this family. I think the last time I played a supportive wife, it was more in a FRIENDS situation, whereas this character is very much enmeshed in this family, and has a sister-and-brother relationship, with the main character Josh, is very obviously loving with her husband, and she’s a new mom. She has a relationship with her mother-in-law Judy, played by Linda Lavin, and her father-in-law Harry, played by Elliott Gould.

LAPIRA: Well, they’re very different people. Judy comes from a way of parenting that my character finds to be overbearing and smothering. Eve likes to think that she is more balanced in that regard, but time will tell. I have a feeling these two ladies are more similar than they think.

AX: Is Judy sort of trying to horn in on the parenting of Eve and Andrew’s infant son?

LAPIRA: Correct. In fact, Judy still parents her own grown forty-year-old and thirty-year-old sons. But to be fair, the entire family is intrusive and overbearing. That’s one of the themes. Dana Klein said it great – “Their only crime is loving too much.”

LAPIRA: A hundred percent. I don’t want to say there wasn’t love in the “friend” comedies that I did, but it’s a different type of love, obviously. A family type of love is closer to the heart, to the bone, and 9JKL is very much a family comedy in the vein of the ones I watched growing up.

AX: Are you working with the infant very much?

LAPIRA: It’s going to be in the season. But I’m used to it, because I had a son in TRAFFIC LIGHT. I’m good at it. I have toddler acting experience, yeah [laughs].

AX: Is it helpful that one of your cast mates, Mark Feuerstein, is a producer who’s in the writers’ room and has a close relationship with another producer, Dana Klein, who is also the show runner?

LAPIRA: Yeah, that is helpful. I’ve also worked with Dana before, from a pilot she did a couple years ago, so I know them both. I knew Mark before, because I guested on ROYAL PAINS, and I knew Dana from the other pilot she did, and I’m fans of them personally, and obviously professionally. So, yeah, it feels like what Mark said about, there doesn’t seem that much of a divide. It already feels like we’re just one big family.

AX: What’s your chemistry like with David Walton, who plays Eve’s husband Andrew?

LAPIRA: I mean, who can’t have chemistry with David Walton? Have you seen him? [laughs] He’s easy on the eyes, but also just personal chemistry. He’s a really lovely person. I got to meet him early on at the audition, actually, and so it’s great. He’s just a great actor.

AX: Is part of Eve’s function to tell Andrew, “You need to speak up about this, this is not normal” when Judy gets too intrusive?

LAPIRA: I would say my function is, we’re kind of all on the same team. I feel like it’s the kids, [which is what] we all call Josh, Andrew and Eve, versus the parents. I think we all see that it’s smothering and boundary-less, but at the same time, we’ll turn around and be smothering, intrusive and boundary-less. I am Josh’s de facto sister, in terms of, I’m the outsider, so I can commiserate on how nuts/bananas the family is, but at the same time, Eve will turn around and be just as intrusive and be like, “Hey, meet my friend [as a potential girlfriend], here she is.” It’s boundary-less, the same. I’m definitely do as I say, not as I do.

AX: Do you have a back story for Eve, either that’s been given to you, or that you’ve come up with?

LAPIRA: Yes and yes. Dana gave me stuff to play with, and I’ve come up with some on my own. Within the pilot, I’m a Harvard-educated pediatrician. I work locally at the hospital around the corner, and we will get to meet my parents, who are very different than Judy and Harry – just as loving, but not as expressive in that way. And she’s just a tough, smart person. Judy is a tough, smart mom and Eve can meet her toe to toe. They’re both really strong women, which I love.

AX: Have you done any research into pediatrics, in case they show Eve at the hospital?

LAPIRA: I did. I did some research into what it takes to be a pediatrician, and it is a lot of work. News to no one, I’m sure, but it is an arduous path. You have to be very tenacious and smart.

LAPIRA: I did an indie with Sharon Stone called A LITTLE SOMETHING FOR YOUR BIRTHDAY. I did another movie with Hal Linden called THE SAMUEL PROJECT. Those are both indies.

AX: And what would you most like people to know about 9JKL?