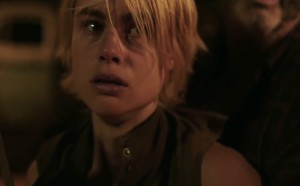 Actress Lucy Fry is hanging out with fellow performer Emily Hampshire at a party thrown for networks under the CBS umbrella, including Pop TV. Fry is on Pop’s new thriller series WOLF CREEK and Hampshire is on Pop’s returning comedy SCHITT’S CREEK. When Hampshire mentions that she’s heard Pop also runs episodes of DAWSON’S CREEK, there are some general “creek” jokes before the talk turns to work.

WOLF CREEK, on Pop TV Friday nights, is based on the Australian horror franchise, about serial killer Mick Taylor (John Jarratt), who preys on travelers in the Outback. Fry, a native Australian, plays nineteen-year-old Eve Thorogood from Omaha, Nebraska. When Mick kills the rest of Eve’s vacationing family, she escapes and decides to seek vengeance rather than return to the States.

AX: Were you familiar with the WOLF CREEK movies before you got involved with the TV series?

LUCY FRY: I was. Because I did a horror film with [WOLF CREEK creator] Greg McLean, who directed the original ones.

AX: Were you in ROGUE, his movie about a killer crocodile?

FRY: Yeah. He also did ROGUE. And I did THE DARKNESS with him. So I watched WOLF CREEK when I was going to do [the series] and I was terrified by it. It’s so scary.

AX: Are you scared when you’re in the scenes, or after the first episode, is Eve more angry than frightened?

FRY: Yeah. The first episode, I was terrified, especially because John Jarratt, the actor who plays Mick Taylor is terrifying, and so good, and so brilliant at terrifying me. But then, after that, I felt a lot stronger, and it became more of a battle than being scared. There are some gruesome scenes that happen, and he’s a serial killer.

AX: Did you have to learn anything in terms of fighting technique for the show?

FRY: I did. I had to learn to shoot guns, to shoot an Uzi, and to throw a woomera. A woomera is an indigenous Australian spear-throwing mechanism. It’s a hunting spear. It’s all pretty rough and guts out there.

FRY: Yeah, that was one of the best things about this, was playing the rage. In the first episode, her family gets killed, and the whole rest of the series is this anger, this burning rage for revenge, which you don’t often get to play as a woman. A lot of the time, you have to be quite gentle and meek, so it was such a great chance to express that side of a character.

AX: Do you have any hand to hand fights with John Jarratt?

AX: Do you have any kind of discussion with each other of how you’re going to approach the fight scenes?

FRY: We did for one of the fight scenes. We had to really block it out. But even still, he really ramps up the energy and doesn’t hold back as an actor, which is perfect, because it gets everyone in the right place. And he would come up with surprises as well, so it was brilliant to work with him.

AX: Did you bulk up in terms of muscle for the part?

FRY: I did. I went to the gym and I did weights and boxing and all sorts of things, and I gained so much muscle, more than I’ve ever had in my whole life, and it’s amazing that, as you get stronger physically, I felt myself getting tougher mentally as well at the same time.

FRY: That’s what I was thinking in my head [laughs]. It’s great that there are more kickass roles for women happening, so at least it’s useful.

This interview was conducted during Pop TV’s portion of the 2016 summer Television Critics Association press tour.