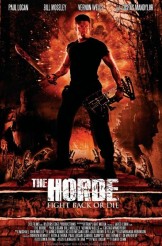 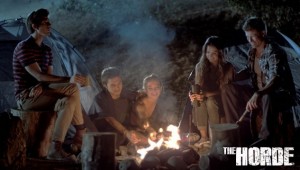 THE HORDE tells the story of a town in the backwaters of America where a group of unfortunate members of a town were exposed to some sort of poisoning in the water supply. Instead of killing them, it apparently mutated them into grotesque malformed hillbillies who love the taste of flesh. I’m not sure what poison they took but holy crap that’s one hell of a side effect.

The actual horde itself are these hillbillies that attack a group of students and their teacher during a nature photography camping trip. Along for the ride happens to be John Crenshaw (Paul Logan) that luckily is an ex-Navy Seal who we get a preview of his abilities during a bar fight where he takes out, well, basically everybody.

Unfortunately for the kids on the camping trip, he’s a bit too late for most of them. Instead, they are dispatched in really brutal ways for the better part of the first half of the film with some really decent horror effects shown. By the time Crenshaw finally kicks into gear, nearly everyone is dead except for his girlfriend teacher and another girl. Then it turns into a one man wrecking crew with Crenshaw systematically taking out the hillbillies in revenge and to get his girlfriend back.

Fans will recognize some of the cast in this flick including horror icon Bill Moseley and SAW veteran Costas Mandylor and Logan is also been in a ton of low budget action movies over the better part of a decade. Logan also wrote THE HORDE and for his first foray, not too bad. While nothing really original is here, it is enjoyable and the horror effects are decent enough to appeal to gore hounds out there.

THE HORDE is available now on video-on-demand through iTunes, Google Play, YouTube, Vudu, Amazon and many more.