DWTS: Season 22 kicked off with lots of athletes, loads of TV personas and plenty of sparkle 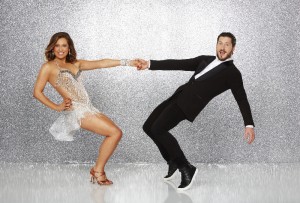 DANCING WITH THE STARS: Season 22 began with a blast of glitter, silver confetti splayed on the audience and bursts of spray tan dripping onto the dance floor. Over half the newfound dance duos received 21 and above in scores, while Geraldo Rivera & Edyta Sliwinska settled on the best worst dance of the night with a measly 13 points out of 30. On top of the leader board, amongst the athletes, various TV personalities and other notable celebs, were AMERICA’S NEXT TOP MODEL winner Nyle Dimarco & his partner Peta Murgatroyd, Ginger Zee & Val Chmerkovskiy, and Wayna Morris & Lindsey Arnold with 23 points.

Geraldo Rivera (social media star) and his partner Edyta Sliwinska
No content. Inaba said he had charisma. Goodman told him to keep working. Tonioli said he was a minimalist in his Cha Cha.
Scores: Inaba – 5,  Tonioli – 4, Goodman – 4, Harland – 7

Wayna Morris (Boys II Men singer) and his partner Lindsey Arnold
Lots of energy. Inaba said he brought it to his Cha Cha. Goodman said it was not his cup of tea. Tonioli said he had good timing.
Scores: Inaba – 8 , Tonioli – 8, Goodman – 7, Harland – 7

The X List: Top 10 Good Things About BUFFY THE VAMPIRE SLAYER - SEASON...
Exclusive Interview: Actor Greg Ellis sails into PIRATES OF THE CARIBB...
THIS IS THE END Highlights this week in Blu-ray, DVD and VOD Releases
Movie Review: STREET