Bones TV Review Season 11 The Strike in the Chord 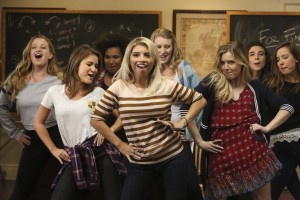 BONES delivers an amiable if uneven Season 11 episode with “The Strike in the Chord.” On the upside, it’s got series regular John Boyd, as James Aubrey, singing, it’s got some gentle pro-animal material, it’s got Brennan (Emily Deschanel) getting to be right about a parenting issue, and it’s got Hodgins (TJ Thyne) very excited about lab work again. It’s also got a good whodunit plot.

On the downside, it’s got some continuity issues – didn’t Angela (Michaela Conlin) used to be an animal lover? – and a strange situation in the lab that stretches plausibility with the BONES universe. Also, while one hates to pick on an episodic show that has comparatively short post-production time, there is some notably out of synch singing. Additionally, it’s not an a cappella group if they have music.

When a pair of would-be animal rescuers find a rat-gnawed body on the floor of a university-affiliated lab, the victim turns out to be Scott, a college student who is the director of his elite school’s all-male a cappella singing group, the Whipper Snaps. Booth (David Boreanaz) and Aubrey investigate and find a spider’s web of intrigue and blackmail. Scott was planning to bring a woman from his school’s all-female group, the Ginger Snaps, into the Whippers. This upset just about everybody, including William Johnson (Nigel Gibbs), an ex-Whipper who is now a lawyer and on the trustee board; he’s also the father of angel-voiced Ian (Jordan Fisher), whom the late Scott had dismissed from the Whippers. Then there’s the Ginger Snap who works at the lab who put toxin in her lip gloss and kissed a bunch of Whippers so they’d get sick during a singing competition, making more room for the Gingers.

However, the culprit turns out to be Scott’s roommate. Scott had been stealing and selling his roommate’s anti-anxiety meds, with the result that the latter failed a test.

In the lab, Brennan welcomes a new assistant, Sammy Mills (B.K. Cannon), who is enthusiastic but woefully unprepared for the new position. Despite the fact that everyone in the lab likes Sammy, Brennan has to dismiss her for not being up to the demands of the job. It’s completely believable that Brennan would fire Sammy. What’s far less credible is the idea that somebody with Sammy’s utter lack of knowledge would be sent to assist Brennan in the first place. Also, given that we’ve never seen this character before, when Hodgins and Angela talk about how she’s one of them, our reaction is, “Huh?”

Booth is looking forward to a summer vacation, hiking the Appalachian Trail with his eldest son Parker (Gavin MacIntosh). However, Parker is studying at Oxford, where he’s been offered a slot in a summer creative writing program. Over Skype, Parker confides in his stepmother Brennan, who lobbies for him with a resistant Booth. Booth is hurt that Parker went to Brennan; Brennan agrees with Booth that she’s not part of this decision, but argues that Parker ought to decide. After reading some of Parker’s work, Booth comes around to feeling that his son should be able to take advantage of the Oxford opportunity.

Given that BONES often tilts towards Booth when it comes to child-rearing, it’s good to see Brennan score a point. In this case, it would seem she’s entirely right, so that’s good, too.

Finally, paraplegic Hodgins has signed up for experimental surgery to that may enable him to walk again. Angela hits the roof when she finds out – and bursts through the roof when she researches the surgery and finds out that people have died from it. Hodgins agrees not to go through with the surgery after all. Although this storyline goes far afield from the core of BONES, Thyne and Conlin are such engaging performers that we’re happy to watch them work on some relatively strong material. Added bonus for rat lovers: Hodgins (actually, the BONES production department) has come up with a first-rate environment for them. We’re sure Michael-Vincent will love his new pets.