Bones TV Review Season 11 The Secret in the Service 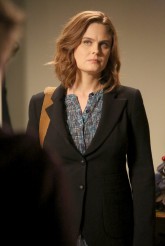 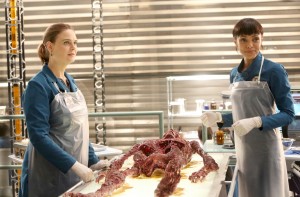 The combination of a Secret Service mystery, a possible threat to the U.S. President and Brennan (Emily Deschanel) having to telecommute due to a bad cold all combine well in the BONES episode “The Secret in the Service.”

A drunken man stumbles over a corpse, calls the cops – and is hit in the face by someone with a shovel. The drunk survives and the dead body turns out to be Secret Service Agent Graham Roberts. It turns out Roberts, along with a number of other Secret Service agents, was on the U.S. President’s detail at a hotel prior to a fundraising event.

Since we don’t have a President Randall running for re-election, “The Secret in the Service,” much more than the slightly supernatural episodes, confirms that BONES is taking place in an (at least slightly) alternate reality. If nothing else, this covers a lot of discrepancies throughout the series’ long run.

Colin Fisher (Joel David Moore), who now has his doctor’s degree, fills in for Brennan at the Jeffersonian at the request of the Secret Service. Fisher says he can’t reveal which government agency he usually works for, but lets it slip that he travels the world surrounded by nubile young women. Angela (Michaela Conlin) correctly deduces from this that, rather than working for the CIA as he implies, Fisher actually tutors the President’s daughter.

In the A story, it turns out the victim was killed by his supervisor, Agent Walker (Michael Gaston), who was suffering from the onset of dementia. Roberts threatened to reveal Walker’s illness, and Walker couldn’t bear being taken off the Presidential detail. Because Roberts’ lover, fellow agent Marissa Patel (Nichi Munshi), is being held as a suspect, the President’s motorcade is one agent short, so Booth (David Boreanaz) steps in (that’s another bit of alternate reality, but whatever). An anti-government terrorist tries to shoot the President and hits Walker instead; Booth takes out the shooter. Between the fact that only Secret Service team members had access to the hotel and the evidence that Roberts was killed by someone with enough physical training to overpower him without weapons, the team concludes that Walker is the killer. However, Walker gave his life for the President, so there’s not much that can be done with the information.

On the fun side, collecting evidence means that someone has to go down a hotel laundry chute. Hodgins (TJ Thyne) volunteers, and when the rope slips, he’s able to hold himself in place long enough to be rescued. Later, Hodgins is jubilant – having so much physical therapy has contributed to his upper body strength, which allowed him to save himself. Before his injury and the physical therapy, this would not have been the case, and he could have plunged to his death. While Hodgins isn’t advocating for paraplegia as a preferable state (and BONES isn’t, either), it’s good to see the character return to his customary ebullience.

Having Brennan be sick doesn’t really do much for the episode – she’s pretty much the same as she is usually, with additional sneezing – but it does no harm. Moore is as always an engaging presence, and the plot and its solution are sound.