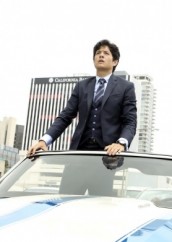 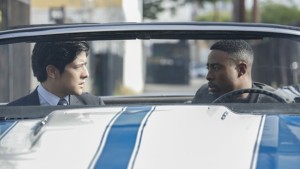 RUSH HOUR is adapted from the film franchise, starring Jackie Chan as a straitlaced Chinese police detective paired up with a freewheeling LAPD cop played by Chris Tucker. In the TV version, developed by Bill Lawrence and Blake McCormick, Jon Foo plays Detective Jonathan Lee, and Justin Hires is the LAPD’s James Carter.

AX: How did you feel about the end of PSYCH?

STEVE FRANKS:  I loved the way it ended. I was so happy and proud with it. Writing the end of PSYCH was this thing that no one ever explained to you. It’s like landing a jumbo jet, and to make it satisfying for everybody, and it was the hardest thing I did in the history of the show, but I was so pleased with it. And hopefully, I’ve left it open enough so that we can do a movie still.

AX: Bill Lawrence complimented you on your fast, quippy dialogue. Was that something you were specifically aware of bringing to RUSH HOUR?

FRANKS: Bill and Blake had written the pilot, and I came in. I was more into breaking the worlds and the stories, and we all contributed there, but there’s a lot of talent in that room. So I’m just keeping myself in this giant river of talent.

AX: RUSH HOUR starts out with a Chinese gang as the main antagonists. Will there be non-Chinese villains as well?

FRANKS: I think we show a mixture of everything. On PSYCH, it was never about that one guy was white and one guy was black. They were friends, and it wasn’t a factor in their friendship or their existence with each other. I write people, and hopefully we’re not leaning one way towards good guys or bad guys. There are good guys and bad guys in every episode. We sort of have an over-arcing gang that comes from China, but we also have both sides of that equation.

AX: is there a through-line of Detective Lee searching for his sister Kim?

FRANKS: Yes. Obviously, we’re not doing a serialized show, but that is a thing that goes over the course of the season. And it plays out rather nicely, and we get a little bit of payoff to that. It’s not going to be Red John from THE MENTALIST, but it’s one of those things that certainly drives the character and the season.

AX: Can you talk about how you and Blake McCormick work together in the writers’ room?

FRANKS: Blake and I are very alike. The first time we met, our mutual person that we knew was Kelly Kulchak, the other executive producer on PSYCH with Chris Henze. So we occupy a little bit of the same space, and yet we have different approaches. For me, it’s all about wish fulfillment. Each world, it’s like, “Oh, my God, we get to go to Disney Concert Hall this week, oh, we’re going to do this!” And I’m looking for the fun of where we get to go on location, and how to take these characters to these fun places. Blake and I both want to do funny dialogue and all that. Blake likes the intensity of the fights and all those things. So I think we balance each other out with that. I mean, I took this essentially to write action pieces, because we’d write silly action pieces on PSYCH and we wouldn’t be able to pull them off, or we would, but they wouldn’t be the grandiose FAST AND FURIOUS things I’d hoped. On this show, they are [laughs]. My first day on the show, we shut down the 710 freeway [in Southern California] and blew up an armored car. And I’m like, “How was I not involved with a network all along?” So that’s been really fun for me.

AX: Are you finding it challenging to get all the action, plus everything else you want to get in, in a week of shooting?

FRANKS: It’s so hard. Because we shoot in eight days. And what we’re writing should be shot in thirteen days. And it’s this constant balancing act of, “Okay, I’m going to shut down the 710 freeway today, and we’re going to blow up this car, now how do we pay for the rest of this?” Fortunately, coming from cable, and having to get things in on a budget, we’re able to sort of man those waters in a clever way, I hope. But it’s always a balancing act, it’s very challenging.

AX: In the pilot, it looks like Detective Lee and the police captain, played by Wendie Malick, have a little bit of a flirtation going on. Does that carry through?

FRANKS: That is something that Wendie brings. She’s this magnetic presence. I don’t think there’s a man who comes on the show who doesn’t have some sort of connection with Wendie, because she’s such a force of nature. So I think there’s something that’s really fun about that. Obviously, that would be intrusive if we went too far with it, in terms of storyline, but there is a fun, flirtatious thing, and John Foo is a beautiful man. Look at this guy. I see romance everywhere. [In real life], John has that British accent, and he’s having to do the Chinese accent, on top of doing these amazing action pieces. And it is him on all those shots, so every time you see someone – the second week we were on the show, he was climbing up three stories of a fire ladder and diving into a parking structure on the third floor. Him!

AX: Is the production’s insurance company freaking out?

FRANKS: There are cables that hold him in place, but it’s like he doesn’t need them. It’s insanity. And sometimes he feels constricted by the safety things that our insurance people [require].

AX: Have you researched Chinese pop culture at all to see what Lee might be into?

FRANKS: I did, and I made sure in our writing room, I had our p.a. [production assistant] put a fact about China that none of us know, and every day, there’s another fascinating factoid. So researching the whole Chinese thing has been fun, and it’s really great, because you can play fish out of water, but you can go to the other side, too, and what they don’t understand, and I think that’s really cool.