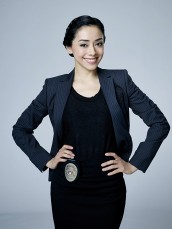 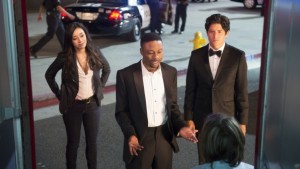 In CBS’ RUSH HOUR, Jon Foo stars as a Chinese police detective in Los Angeles, with Justin Hires as his LAPD partner. Aimee Garcia and Page Kennedy costar as characters on opposite sides of the law. Garcia’s single mother Detective Didi Diaz is all for enforcing the law, while Kennedy’s Gerald is an informant who gets into a lot of questionable situations.

Garcia spent several years on DEXTER as the title character’s innocent child-care provider. Kennedy, who is also a standup comedian and hip-hop artist when he’s not acting, was a regular on BACKSTROM and BLUE MOUNTAIN STATE.

AX: Were you a fan of the RUSH HOUR films?

PAGE KENNEDY: Yes. I was a big fan of the RUSH HOUR films. Those are iconic films for me, and so when this opportunity came, I was just like, “Oh, man, I would really like to be a part of it.”

AIMEE GARCIA: Yes. I have a lot more bruises on this show, because I do my own stunts for the most part. I love it. They’re actually bringing her into more of the action. [Diaz started as a sergeant and] she’s now Detective Didi Diaz, so she can be more out in the field. And what I love about this show is that it’s girls in four-inch heels, looking really good, but also being whip-smart, one step ahead of everybody else, knowing how to use a gun, and holding her own in a guy’s world. I love that. I feel like you never get to see women, or single moms, who can just hold their own with everybody and kick some serious mom butt.

AX: Is there anything you had to learn for your characters, like how to throw a punch or take a punch?

KENNEDY: [laughs] No, I’ve done both of those growing up, so no research for me, so just ready to go. [Although for the show], without landing the punch.

GARCIA: I had to learn how to hit someone with one shot when your life is on the line, and your kid’s life is on the line, because any mother will do anything for her kid, and any cop will shoot correctly to save herself and her family. I’ve learned how to gracefully do a fan kick across a table before holding a knife to someone’s throat, I’ve learned Muay Thai from Jon Foo, and I’ve learned salsa dancing, because Jon and I salsa in between takes, and I’ve learned how, as a smaller girl, how I can bring down a big guy and use my weight and my height to my advantage.

AX: How are you enjoying working with your fellow performers?

KENNEDY: Justin and Jon? I love working with Justin and Jon. Justin and I actually did social media, funny videos, before RUSH HOUR, so we were already friends years before. So we already had a camaraderie and a chemistry with each other, and that just was enhanced when we got to do it on the small screen. And Jon, he’s completely different, which is something that’s fun in the juxtaposition of us, is great to watch. I just had a whole episode with Aimee, and we go out on the chase together, her and I, which is strange, but it was really, really fun. It was some of the most fun I’ve had, doing that with her.

AX: Is RUSH HOUR the style of comedy that you and Justin Hired used to do together, or is this a completely different style?

KENNEDY: Pretty much. I mean, Justin still has to maintain the decorum of an actual, real detective, so he can’t go as broad as I can. So for me, this is my brand of comedy, this is big, broad humor.

AX: How would you describe what Gerald does in terms of his function in the story? 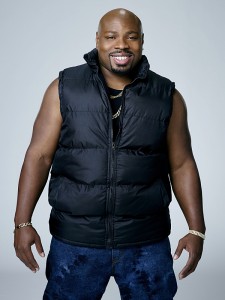 KENNEDY: They come to me for information; I come to them with information that I may have found. Sometimes I’m just there to help out, sometimes they get caught in peculiar situations and they call me to help get them out of it.

GARCIA: That it will be a wild, funny, fun ride, and it won’t leave you drained. It will completely entertain you. I think so much of TV right now, you have to be well-fed and well-rested to watch it, but we’re just old-fashioned fun. You’ve had a long day of work, you come home, you see hot guys, hot girls, helicopters falling from out of the sky, standup comedians improvising, and you leave completely entertained.