Home » The Girl on the Train Movie review 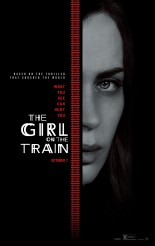 ©2016 Universal Pictures
THE GIRL ON A TRAIN movie poster
Reviews

Movie Review: THE GIRL ON THE TRAIN

Raises curiosity, though not involvement 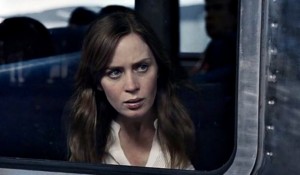 Emily Blunt in THE GIRL ON A TRAIN | ©2016 Universal Pictures

On the upside, THE GIRL ON THE TRAIN starts out as being truly unpredictable. Those (a group that includes this reviewer) who haven’t read the source material, Paula Hawkins’ novel, will not only not know who done it, but won’t even know exactly who it’s been done to until it happens, and then not know why for a bit longer than that.

On the downside, when we start to realize where this is all heading, we think, “It can’t really be that, can it?” And it’s a bit of a slog getting there, because with the exception of Allison Janney’s wry, subtle police detective, most of the characters start out as fairly unlikable and remain that way.

We meet the title character, Rachel (Emily Blunt), as she is riding a commuter train that runs between the green, pricey suburbs and New York City. We hear Rachel’s thoughts as she muses on her unhappy daily habit of gazing out the same window from the same train compartment at the house of a couple, Megan (Haley Bennett) and Scott (Luke Evans), who are often very romantic in full view of the train. Rachel idealizes what she sees between these two as an expression of true love – so unlike what she experienced when her marriage to Tom (Justin Theroux) collapsed. It’s hard to know exactly how reliable Rachel is as a narrator, as she is an alcoholic who suffers memory lapses and even blackouts.

Tom is now remarried to Anna (Rebecca Ferguson); they have an infant daughter together. Megan is their neighbor and nanny. Megan is also seeing a therapist (Edgar Ramirez) to deal with some deep issues of her own.

Director Tate Taylor creates some very pretty images, and for awhile, his work and Erin Cressida Wilson’s script produce a sense of suspense. Then everything starts becoming increasingly improbable. There are a few too many coincidences fueling the story, and once the mystery is laid bare, it seems like a key role is miscast.

This is not the fault of Blunt, who gives a fluid performance that can be deeply restrained, yet also brimming with sorrow and rage. Given how magnetic and humane Janney is, we wish she were given more to do here.

THE GIRL ON THE TRAIN appears to follow in the footsteps of 2014’s GONE GIRL, but it lacks the earlier film’s twists and infinitely complex central character. There are twists here, but never the kind that make us feel like we should have, could have known, and missing the depth of personality and imagination to make us feel that we’re seeing something new. At the beginning, we are drawn in by the unusual set-up, but by the finale, the film feels like an exceptionally well-made episode of a TV procedural, told from an outsider’s point of view.