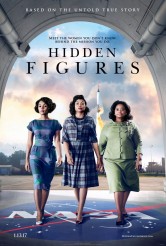 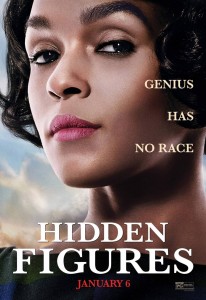 Katherine Johnson, Dorothy Vaughan and Mary Jackson are historical figures whose fame is long overdue. All three were key NASA personnel during the Mercury 7 project and went on to stellar careers. However, both because they are women and because they are black, their contributions have been largely overlooked until now

HIDDEN FIGURES, a film based on the book by Margot Lee Shetterly, aims to rectify this. We meet Johnson (Taraji P. Henson), Vaughan (Octavia Spencer) and Jackson (Janelle Monae) when the three friends are all working as human “computers” at NASA’s base in Langley, Virginia in the early 1960s. Johnson, a mathematical genius, is sent to help with flight calculations in a group that is largely male and all-white in a segregated state. Jackson wants to be an engineer, but the only way to get her degree is to take classes that are so far racially segregated (and not friendly to female students, for that matter) – to attend, she must prevail in a court hearing. Vaughan is serving as the unofficial supervisor of her group. She’d like the supervisor title and the pay raise that should go with it, but meets intense resistance, along with condescension. Then Vaughan sees that an electronic computer is on the base, realizes that it’s the way of the future, learns FORTRAN and is able to program the machine in a way that others cannot.

All three of these stories each deserve a feature film of their own. HIDDEN FIGURES respects and admires the women, but in the movie, at least, there’s not a lot of crossover in their career trajectories. This means that a lot of things have to be compressed into cinematic shorthand, with the result that we feel like we’re missing a mass of how, what, why and who in the telling.

This is most evident in the case of Vaughan, who is depicted as mainly just wanting a professional and financial advantage when it comes to then then-massive computers. If she’s got the human and understandable response of triumph over the men in supervisory positions around her when she gets the machines to work, it’s pretty subdued in the film.

Likewise, when Johnson reaches a breaking point due to a particularly idiotic and time-consuming aspect of racial segregation, there is more sorrow and hurt in her outburst than fury. Actual, fully-expressed outrage over racism is mostly left to the supporting character of Jackson’s husband (Aldis Hodge). This is a movie that doesn’t want to get overtly angry, which feels increasingly strange as it goes along. It also emphasizes sexism rather than racism, when what we’re seeing suggests both are of equal weight when it comes to the roadblocks the characters face.

There are some great moments, of course. Most of us would be hard-pressed to not get excited about the first manned space launch. Johnson’s genius for mathematics is part of what makes this possible.

HIDDEN FIGURES also benefits from the extraordinary talent of its leads. Henson and Spencer are both powerful and grounded, and Monae holds her own. Along with Hodge, the supporting cast includes Mahershala Ali, Kevin Costner, Kirsten Dunst, Glen Powell and Jim Parsons, all very adept.

HIDDEN FIGURES shines a light on three real women who deserve great acknowledgement. The movie makes us want to learn more, which is a good thing, but it would be better if we felt better informed coming out of the theatre.