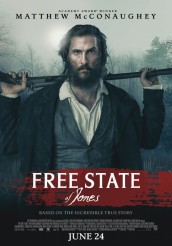 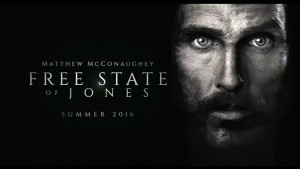 Rather extraordinarily, the broad facts of FREE STATE OF JONES are true. During the Civil War, a Mississippi farmer named Newt Knight brought together a small, multiracial militia and effectively seceded from the Confederacy. The story was previously fictionalized in the 1942 novel TAP ROOTS and its 1948 film adaptation.

There remains a great deal of controversy about Knight’s motives and specific actions. In FREE STATE OF JONES, directed and scripted by Gary Ross from a story he co-authored with Leonard Hartman, Knight as played by Matthew McConaughey is a man of great conscience and powerful stubbornness. Serving as a nurse in the Confederate Army, Knight goes AWOL when he has to leave to field in a futile effort to get help for a young nephew who has been mortally wounded.

Wanted by the Confederates for desertion, Knight is helped into hiding in the local swamp, where he meets a small community of black men who have escaped enslavement. They help Knight, he helps them. They are eventually joined by a group of white men who, like Knight, have fled the war. Already angry at some new laws that grossly favor the rich at the expense of the poor, Knight formulates a political theory that goes something like this. The Confederacy doesn’t want to have to pay for its cotton production, so it’s forcing poor white men, who don’t own slaves, to fight for the ability of rich white men to continue to force black people to work their fields. Knight doesn’t believe the poor should have to fight and die for the rich, and whatever his earlier opinions, he now doesn’t think human beings should be able to own each other. This goes down better with some of his companions than with others, but they’re all at the same risk.

Knight and his group are successful in stopping Confederate soldiers from coming into the swamp to arrest them. What starts out as simple self-preservation expands into guerilla warfare. When Knight appeals to Union General Sherman for help and gets almost nothing, he decides that Jones County ought to be its own free state.

FREE STATE OF JONES has a lot on its mind, not only extending its story past the end of the Civil War (we learn of the appalling “apprenticeship” practice, an attempt by former slave holders to reverse Emancipation), but jumping forward in time to a court case (also fact-based) involving one of Knight’s descendants in the Forties.

That’s a whole lot of material, and it is somewhat uneven. The incidents are intriguing and sometimes infuriating, as they are meant to be. Knight is presented as a figure of nobility, an outlaw hero who truly believes in the rights of humans. McConaughey and the filmmakers mutually understand that Knight has to be charismatic as well as admirable and determined, all qualities that come to the fore. Events move at a brisk enough clip that we don’t ponder too long on Knight’s saintliness.

The movie does flirt a bit with the trope of sticking a white character in the middle of a black issue, but since there are a lot of other issues here as well, and since the black characters have their own opinions and agendas apart from Knight, this aspect doesn’t seem too egregious. There is one ill-considered speech from Knight where he attempts to persuade the diverse men in the camp of what they have in common; it doesn’t earn its language. Elsewhere, though, the philosophical dialogue works well.

Among the supporting cast, Mahershala Ali is powerful as Moses, who has his own talents for organization. Gugu Mbatha-Raw and Keri Russell both have warmth as the women in Knight’s life.

Subtitles are employed to give us context. There are more of them than we might expect, but given the complexity of what’s happening, this allows the story to proceed in all of its dimensions. The subtitles are preferable to leaving us guessing, voiceovers, or awkward exposition.

The armed confrontations range from humorous to brutal. It’s made viscerally clear why Knight and his companions aren’t inclined to fight for men who won’t fight for them. It’s also a kick to see a few extra dimensions to the issues of the Civil War.

FREE STATE OF JONES has its moments of clumsiness, but it also has scenes that are rousing and a story that, as they say, makes learning fun.

The Ten Things We Want To See in BONES - Season 7
TCA 2011: ABC talks about new series ONCE UPON A TIME and its sustaina...
Exclusive Interview: Stephen Colletti climbs ONE TREE HILL for its fin...
VIDA: Creator Tanya Saracho gives the scoop on the third and final sea...