Home » In Memory of Carrie Fisher 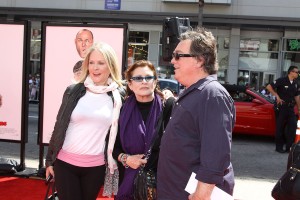 Carrie Fisher and guests at the World Premiere of THE THREE STOOGES: THE MOVIE | ©2012 Sue Schneider

The universe shrank a little today, December 27, with the loss of Carrie Fisher, age 60. The cause of death appears to have been complications following a heart attack.

Fisher was a renowned writer of both memoirs and novels, an in-demand script doctor, a hilarious raconteur, and a passionate advocate for the rights of women and those grappling with mental health issues.

However, Fisher is eternally beloved by a legion of fans for her performances as Princess Leia, later General Organa, in the STAR WARS movies. Leia Organa is a hero who can hold her own, whether it’s with a blaster or with banter; for many young girls, she was the first big-screen female character they saw who got to be as important and do the same cool things as the males in her cadre. Leia was a central figure in last year’s STAR WARS: THE FORCE AWAKENS, as well as in George Lucas’ original trilogy (STAR WARS: A NEW HOPE, THE EMPIRE STRIKES BACK, THE RETURN OF THE JEDI). 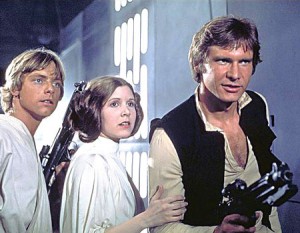 While the STAR WARS franchise was first produced by 20th Century Fox, the Walt Disney Company took over when it purchased Lucasfilm. Bob Iger, Disney’s chairman and chief executive officer, put out a statement. “Carrie Fisher was one of a kind, a true character who shared her talent and her truth with us, all with her trademark wit and irreverence. Millions fell in love with her as the indomitable Princess Leia; she will always have a special place in the hears of STAR WARS fans, as well as all of us who were lucky enough to know her personally. She will be sorely missed, and we join millions of fans and friends around the world who mourn her loss today.”