The creator and executive producer talk their alien threat series 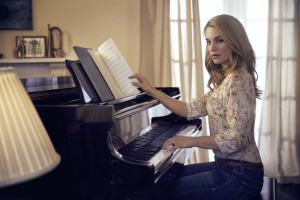 In Syfy’s Monday-night series HUNTERS, created by Natalie Chaidez, a new division of the government investigates whether certain terrorists are really extraterrestrials, and vice-versa.

ASSIGNMENT X: Can you describe the basic setup of HUNTERS?

GALE ANNE HURD: Imagine that we’re living in a world and aliens are indeed among us. And we’re not quite sure what their agenda is. We have people who assume what their agenda is and operate based on a very limited set of facts. And then you have people like Flynn’s character [played by Nathan Phillips]. His wife is kidnapped. At the time, he has no idea that [there are aliens] and he’s about to have a very rude awakening, so in essence, we are entering this world through him and what he is able to discover. And he’s dealing with the prejudice that we all might deal with, which is, “If you belong to the group that kidnapped my wife, you must be bad,” painting everyone with the same brush. So that’s really what he’s facing, and he’s partnered with someone who [is alien, played by Britne Oldford, but] isn’t a Hunter. So it creates conflict, but it also creates an opportunity to examine how we deal with somebody. Let’s say [the alien] saves him. How does he deal with that? Does he just say, “Oh, it’s because she’s got another plan later on”? It’s a lot of the things that we’re dealing with in the world today, where we assume that if you’re an immigrant from a war-torn country, you must have another agenda, regardless of whether you’re just trying to escape an impossible situation.

AX: To follow up on the immigrant analogy, because the aliens are in a sense immigrants from further away, do you hope that your audience is intelligent enough to go, “Okay, we don’t really think that real-world immigrants have dangerous powers …”?

HURD: Some people have very entrenched perspectives on the world, and that’s why science fiction is such a great genre to examine our prejudices, because we go into it without really knowing. We are able to discover along with our characters what is true. Maybe that gets turned on its head. But we suspend our disbelief – in essence, we suspend our prejudices when we’re in the science fiction world.

AX: How are you dividing your time between projects?

NATALIE CHAIDEZ: It’s the second season of 12 MONKEYS [also on Syfy Monday nights]. I worked in breaking the second season, and then I peeled off. The show HUNTERS was shot in Melbourne, Australia, so it was written here in L.A. and then I went to Melbourne [where HUNTERS is shot]. That’s how I juggled 12 MONKEYS.

HURD: And we had all thirteen scripts written before we started shooting, so she worked very hard with the writers’ room, so that when she went to Australia, we knew every episode, where it was going, and it allowed us to do block shooting as well, so that we could maximize the production value.

AX: Your aliens look a little Giger-esque. Was that on purpose?

HURD: We were able to call in a few favors, so the initial design of our central Hunter was by Greg Nicotero from THE WALKING DEAD, and he’s the one who recommended the genius in Australia that we used, [co-producer/special effects supervisor] Justin Dix, who was the one who said, “We have to get 3D printers here. We can create everything.”

CHAIDEZ: We had a wonderful production designer, too [Clayton Jauncey].

AX: One of the wonderful thing about the makeup effects community is that it’s an underground worldwide community …

HURD: And they’re so supportive of each other. So Justin Dix was our prosthetics guy. We had our own lab in Melbourne. He bought everything. He calls himself an old-fashioned “prac man [practical effects artist].” So the weapons were designed – I worked closely with a professor from Michigan, Seth Horowitz. He’s an expert in sonic weaponry. So I really started with the science and then worked backwards, how the weapons would work, how the effects would work. Once the designs were created, we had a concept artist named Seth Justice, and then our prosthetics guy, Justin Dix, brought this to life using the 3D printers to work very hard, never complained about overtime [laughs].

CHAIDEZ: And by the way, it [the 3D printer] is like magic. Honestly, you have what looks like a large toaster oven, or a large microwave. You put the material in it, it looks like a blob, and then you come back the next morning and it is a prop that they then painted and aged. It clearly is the future. I know everyone’s been talking about it at CES [Consumer Electronics Show], but there’s a reason why, and it allowed us to do things, to innovate, without having to wait months and months. You can’t wait on a TV schedule to have a prop ready to use tomorrow.

AX: To ask a thematic question, because you both have shows about people who are trying to save the world or at least each other, can you talk about the differences in their outlook towards the enemy in 12 MONKEYS and WALKING DEAD and HUNTERS? What are some of the philosophical and emotional differences in the quests on the three shows?

HURD: On THE WALKING DEAD, you can see who’s a Walker. It’s very clear. The difficulty there is, can you ultimately kill permanently a person that you love? You’re always facing death every moment, because it could happen to you at any second. And with aliens on this show, our characters are wrestling with, are all aliens bad aliens? Are all humans good or bad? Can both have a little bit of both inside? Are we more alike than we are different? I think Natalie can address this better, but there are humans making things far worse as well, so it’s never really black and white, it’s always shades of gray, and you talk about people crossing the line …

CHAIDEZ: I’ve formulated my thoughts. I think the difference between WALKING DEAD and 12 MONKEYS is that our heroes are still working within a societal governmental structure, with a set of codes and a set of rules, whereas in WALKING DEAD and 12 MONKEYS, it’s a post-apocalyptic world. In HUNTERS, it’s a grounded world, where we’re still living within the restraints of our own government. So how far do we go? Do we break that code? Do we even have a code?

HURD: Does the government follow its own rules? We’re facing that in the world today. There’s the Geneva Convention that dictates the rules of war, and we’re basically saying, “Well, in the war on terrorism, it doesn’t apply, because they’re not part of a state.” And then we’ve got ISIS saying, “No, we are a state.” I mean, it’s incredibly complex and more than one series can deal with [this].

AX: Do you find one or the other easier or harder as writers/creators in coming up with storylines? Even if characters are breaking the societal rules, is it easier to come up with plots for HUNTERS, or the other shows?

HURD: It’s unfortunately really easy to come up with HUNTERS stories, because you just look at the front page and say, “What’s the alien version of this story?” So it’s terrifyingly close to reality, because we do stories about suicide bombings, we do stories about detainment. So all of the modern-day issues, “ripped from the headlines,” which is not really something most science-fiction really addresses. Well, HUNTERS is doing it.

AX: It’s like what Dick Wolf does with LAW & ORDER, only science fiction …

CHAIDEZ: Except it’s serialized storytelling. There are overall arcs and obviously, a lot of these things happen in a particular episode, but they aren’t resolved in the episode.

AX: What would you most like people to know about HUNTERS?

HURD: That in addition to everything else, it’s incredibly entertaining. You can watch it on that level as well. So if people want more from it, they will get that, but first and foremost, it is an entertaining show that is exciting and mind-bending and very character-driven.

This interview was conducted during Syfy’s portion of the most recent Television Critics Association press tour in Pasadena, California.