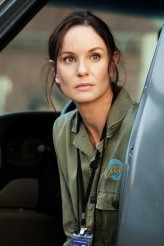 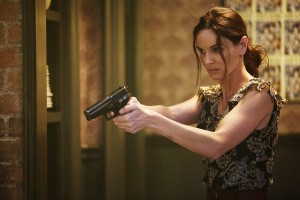 Now Callies is tackling another protagonist dealing with cataclysm in USA Network’s COLONY, Thursdays at 10 PM. Much of the world has been destroyed by alien warships and Los Angeles is divided into a number of walled sectors. Callies’ character, Katie Newman, has had one of her three children taken away by the aliens. Katie’s husband Will, played by Josh Holloway, is collaborating with the human government working with the aliens, in the hopes of getting their son back. Katie, however, is secretly a leader of the resistance.

AX: Does Katie feel like she’s protecting her children, or is she worried that she’s endangering them?

SARAH WAYNE CALLIES: I think everything that Katie does, she does with her children in mind. But I think when we start this story, we’re ten months into the occupation, and I think Katie’s at a point in her experience of this oppressive regime [where she feels] that maybe it’s not just about keeping their bodies alive, but that I need to protect their spirits and their intellectual and emotional lives as well. And I think that starts to drive her towards a certain kind of “better to die standing than live on your knees” mentality, if that makes sense.

AX: Do you feel that Katie’s a little more proactive as a character than Lori was?

CALLIES: No. I think COLONY is written from Katie’s perspective as much as it is Will’s, and WALKING DEAD was written from Rick’s perspective, not Lori’s. The audience never had a chance to track the logic behind her decisions, and the motivations behind them, which made it very hard to sympathize with [her].

AX: And how is it playing a mom to several children? I think you’ve said you actually are a mom in real life?

CALLIES: I am, and when I was on WALKING DEAD, I had one kid, and I now have two. So my career is evolving right alongside my children. And I think it’s interesting – there’s a difference between raising one child and raising more than one child. Your attention is fractured and I think you also have a deeper appreciation for the individuality of each kid, so I think when it comes to [Katie and Will’s] older son, she’s aware that he’s maybe more angry and emotional about what’s going on, whereas with her daughter, I think what frightens her is this idea that she’s getting very used to it, that she’s getting comfortable. And that’s even worse, I think.

AX: Have you had to learn how to do anything new for COLONY – use new weapons, drive a Jeep …?

CALLIES: I think one of the biggest things I had to learn is to navigate a different relationship with femininity. A lot of the characters that I’ve played before are strong in a way that a lot of men are strong. And Katie is a woman who is very feminine, and who not only appreciates her femininity, but is starting to understand that femininity can be a tool of war. And so that’s a new skill for me.

CALLIES: I’ve got a couple of films in development as a writer. Gale Anne Hurd, who obviously produced WALKING DEAD, asked me to write a screenplay for her, and I have, and we have attached a director. I’ve got an animation project actually set up in France.

AX: Can you say what your writing projects are about and what genres they’re in?

AX: And what would you most like people to know about COLONY?

This interview was conducted during USA Network and NBC/Universal’s portion of the Television Critics Association press tour.