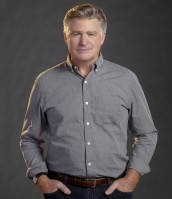 The actor talks about his new small town series 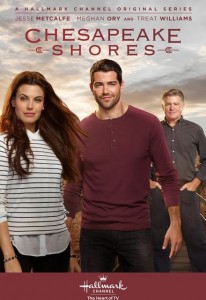 It’s been a busy year for Williams, known to TV fans for his four years on EVERWOOD and his portrayal of the title character in EDDIE DODD. Movie viewers know him as George Berger in the film version of HAIR and for his work in PRINCE OF THE CITY, among many credits.

At a party thrown by Hallmark Channel for the Television Critics Association press tour, Williams talks about CHESAPEAKE SHORES and everything else he’s been doing lately.

TREAT WILLIAMS: [He’s] the patriarch of an Irish Catholic family in the Chesapeake Bay area. I have five grown children who aren’t particularly happy with me, even though they’re grown, so there’s lots to figure out. It’s a very large family. I’ve kind of built the town, so there are lots of problems to solve. There’s a lot of love, and a lot of annoyance, and a lot of good stuff to go on. That’s basically it. We’re going to make eight. It’s a series, and I’m real excited. It’s in the genre of EVERWOOD, small town, a lot of small town people have family, a lot of small town people know too much about each other.

AX: Do you enjoy this genre?

WILLIAMS: I live in a town like that, so it’s very comfortable for me [laughs]. I live in a small town in Vermont. Listen, I love Frank Capra, so it’s along the lines of getting through life and helping each other out and accepting each other’s particularly bizarre differences. I love all that. That to me is America at its best.

AX: Are you doing any films as well?

WILLIAMS: Let’s see. I’m glad you asked. I play Ted Kennedy in a film for HBO called CONFIRMATION [now available on home video], about the Clarence Thomas hearings, and I’ve got a movie that I starred in called THE CONGRESSMAN, about a burned-out congressman who sort of rediscovers what’s important in his life. I’ve got a trilogy of comedies that I did called PUPPETS SPEAKING, which I think are very funny. They’re three short films, and we’re not sure what we’re going to do [in terms of a release platform], but I’m very proud of them.

AX: Given that you’ve done CONFIRMATION and THE CONGRESSMAN, do you like doing topical material?

WILLIAMS: Yeah. I played Jack Dempsey, I played J. Edgar Hoover. Making CONFIRMATION, we were all at the dais twelve hours a day, it was hard, but I’ve got to tell you, Greg Kinnear [as Joe Biden] rocks the house, and so does Kerry Washington. It’s great.

AX: Your performance in the 1979 film version of HAIR is still pretty indelible. You’ve mentioned that you worked with Wayne Cilento …

WILLIAMS: My old friend Wayne Cilento, seven-time Tony Award nominee, two-time Tony Award winner, who choreographed WICKED and TOMMY, and starred in A CHORUS LINE. We did WEST SIDE STORY forty years ago.

AX: Who were you in WEST SIDE STORY?

WILLIAMS: I was Diesel, one of the Jets. He was Arab. He had to dance; I couldn’t.

AX: But you danced in HAIR …

AX: Do you want to do a musical again?

WILLIAMS: You have no idea. [Musical theatre] is what I started in, but I kind of went, “What was I thinking? Where did I go?” I mean, I did, I was raising a family, but my last musical was Sondheim’s FOLLIES, on Broadway. I want to go back.

AX: Might you at least pick up a guitar and sing a little in CHESAPEAKE SHORES?

WILLIAMS: No. I got my fifteen minutes. I don’t need to prove it. If they ask me to, and it’s the right thing to do, yeah. But the idea of, “Oh, now we’re going to see that Treat Williams can sing and play the guitar” [is unappealing].

AX: Are you drawing on actually being a parent to play a parent?

AX: What do your real kids think of your onscreen fathering?

WILLIAMS: They’re not interested. They don’t even watch. It’s great. I’m not an actor to watch, I’m Dad.

AX: What would you most like people to know about CHESAPEAKE SHORES?

AX: And what would you most like people to know about the state of Treat Williams?