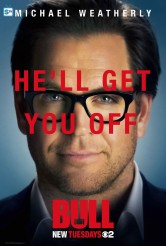 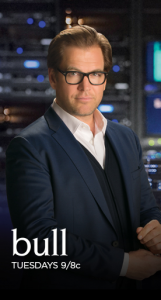 Michael Weatherly has spent thirteen years on NCIS playing Anthony DiNozzo. At the end of last season, DiNozzo bid farewell to his colleagues. Now Weatherly is back on CBS on Tuesday nights (right after NCIS), heading up the new series BULL.

Weatherly’s character, Dr. Jason Bull, is loosely based on the early career of Dr. Phil McGraw when the latter was a trial consultant. In BULL, the protagonist heads up the Trial Analysis Corporation. Bull and his team of legal experts figure out the psychology of jurors and lawyers in order to help their clients in the courtroom.

At a party thrown by CBS for the summer 2016 Television Critics Association press tour, Weatherly takes some time to have a no-bull discussion about BULL.

ASSIGNMENT X: How did you become involved with BULL?

MICHAEL WEATHERLY: Well, CBS brought me to it. They called me and said that they had a project that they were developing, and it was about the art of trial sciences. And I say “art,” because it’s art and science. And when they told me that Paul Attanasio was the writer, and I knew [his work] from HOUSE and DONNIE BRASCO and QUIZ SHOW and HOMICIDE, it became clear that it was going to be really of a high caliber, and I knew that [Steven] Spielberg was producing. So you pay attention to that call. So that’s how it happened.

AX: After all years on NCIS, were you looking to play somebody who was a little bit more cerebral and a little bit less impulsive than DiNozzo?

WEATHERLY: Yeah, I think it was a very nice spin, and a very natural transition. In a way, Bull is more emotionally connected, but in a way, he’s more troubled than DiNozzo. I always used to say that DiNozzo swims in the shallow end of the philosophical pond, and he wears little arm floaties. And Dr. Bull is in the deep end, all the time, of himself and everyone else. So it is a total change.

AX: Do you feel any different sense of responsibility, being Number One on the call sheet on BULL?

WEATHERLY: Sure. But I also know, being on a great ensemble show like NCIS, that that’s nothing but a number. Everybody has to give a hundred percent and it’s a collaboration and nobody does it alone. So I’ve been really fortunate to be raised on a show that gives me everything.

AX: Is the title BULL meant to evoke the automatic response when we hear “bull” in conversation?

WEATHERLY: Yeah. I think, how many of us really trust the legal system to do the right thing? So you kind of want somebody who could help you navigate some of the bull. I don’t think it’s necessarily about the guy being full of bull. I think it’s much more along the lines of a world where there’s a lot of bull, and you’ve got to [fight against it].

AX: Are there story arcs through the show, or is it going to be all standalone episodes?

WEATHERLY: Every show has its own encapsulated beginning, middle and end, but as we move along, there will be characters that are established that do have arcs.

WEATHERLY: I think that will be very clear for the audience, yeah. I mean, my mom in Rhode Island needs to know what happened.

AX: Are you a fan of legal procedurals?

WEATHERLY: Well, all the way through this process, it’s been funny, because I think of this less as a legal procedural and more of a show about human behavior and focus-group testing and what somebody’s bandwidth is and how available they are to new information. When they believe in a certain political party, how much can you get [a Democrat to vote Republican], or vice-versa, right? So how you get from there to a legal show – it’s not really about right and wrong, and good and evil. It’s more about the complex gray area. And the human heart, obviously, is the one place where there’s truth. You and I could watch the same thing go down, and have totally different stories about how it went down. And if the same facts laid out, but how you feel about it is what is important, and what BULL ultimately is about is past the bulls*** and past the tricks and all the science, is really about Bull connecting.

AX: Did you have say into the casting of your co-workers on BULL?

WEATHERLY: No. I’m a producer on the show, but I’m not involved in those kinds of decisions.

AX: What would you most like people to know about BULL?

WEATHERLY: That [Dr. Jason Bull is] not a con artist, that he’s not Machiavellian or superior and smug. He’s really interested in getting to the heart of the matter and making sure that nobody goes to jail for something they didn’t do. I think ultimately it’s a show about innocence, not guilt.