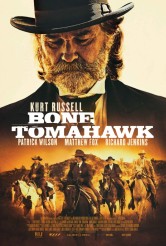 A solid Western with a twist 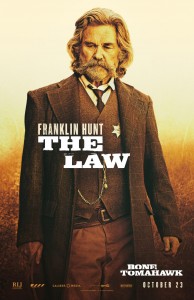 Movie Westerns are still being made, but the old cowboys-and-Native Americans subgenre is no longer very active, for what can be hoped are obvious reasons. BONE TOMAHAWK gets around those reasons with one of the great gifts that horror provides – when it’s not acceptable to depict a whole group of human beings as bloodthirsty monsters, use actual bloodthirsty monsters.

BONE TOMAHAWK signals both its horror and Western intentions in its very first shot, though the horror thereafter slides away, only to come roaring back in the last act. The Civil War has ended and the little frontier town of Bright Hope seems to be a relatively decent place to live, courtesy of Sheriff Hunt (Kurt Russell). When two very bad but not very bright criminals (Sid Haig and David Arquette) desecrate a strange-looking burial ground out in the middle of nowhere, one of them survives and makes his way to Bright Hope.

Since this survivor is selfish (and venal, and homicidal), he doesn’t care about what happens to others as a result of his presence. Since he’s pretty dim as well, he may not even realize the implications. However, he’s been followed. There’s a multiple kidnapping, which may or may not be connected to some large-scale horse-rustling.

The local “Indian” expert, a Native American called the Professor (Zahn McClarnon), examines the bit of evidence left behind and declares that this is not the work of any known tribe, but rather actual troglodytes that dwell in the myth-shrouded Valley of the Starving Men.

Despite the Professor’s warnings of the futility of their quest, a posse sets out to rescue the kidnap victims and, if possible, recover the stolen horses. The group is headed up, naturally, by Sheriff Hunt, accompanied – over his protests – by his aging but loyal deputy Chicory (Richard Jenkins), the broken-legged but extraordinarily determined former soldier Arthur McDwyer (Patrick Wilson) and the Indian-hating Brooder (Matthew Fox).

For about three-quarters of its two-hour, twelve-minute running time, BONE TOMAHAWK is a straightforward Western, with men pitted against the elements, each other and their own shortcomings. Characters are delineated with nuance, none better than Chicory, played delightfully by Jenkins, a man who may not be all that bright, but of great innate decency and ability to come up with odd musings just when others need distraction.

For those who’ve recently viewed Russell in THE HATEFUL EIGHT, he still has a face full of mighty hair, but the actor’s Sheriff Hunt here has clearly given a bit more thought to life, ethics and the general state of the world than has the other film’s John Ruth. Wilson is impressive as a man whose spirit and body are at war with one another, with a temper that’s apt to abet the wrong side at just the wrong moment. Fox does a good job with a character who could have used a little more background from the writing.

At the three-quarters point, the film takes a turn toward extreme violence that fits some definitions of horror. (In some other genres, it might just qualify as plain old extreme violence.) This serves a couple of purposes beyond inventive gore – it demonstrates this is a situation in which negotiation is not possible, it provides incentive for otherwise decent people to attempt to escape by any means necessary and it generally ups the stakes.

What’s really intriguing and commendable about BONE TOMAHAWK is that it has big ambitions that it sticks with all the way through. Writer/director S. Craig Zahler wants to make a traditional old-fashioned Western, have at least one unforgettable shock moment and still seriously contemplate the notion of genocide. There’s a wordless scene late in the running that commands respect.

BONE TOMAHAWK is long, but doesn’t feel that way. Budgetary limitations are sometimes suggested by framing choices, but there’s never a sense that a particular shot needed something the filmmakers couldn’t afford. It’s not exactly profound, but it at least participates in a worthy discussion. Those who like character-driven Westerns but are squeamish can just look away at a couple of points; those who like character-driven Westerns and appreciate inventive gore will get both.

The home video release includes a making-of featurette, a deleted scene and a Q&A session conducted at Fantastic Fest.