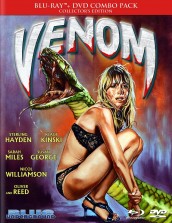 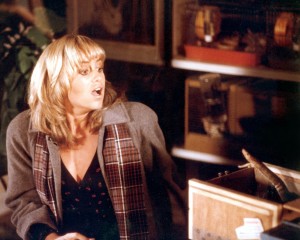 Billed as the greatest snake-in-the-house movie of all time (Are there a lot of them out there? I’m asking for a friend), 1981’s VENOM begins as a kidnapping for ransom flick that quickly evolves into a fight for your life against the deadliest snake on the planet, the black mamba.

A terrorist, his henchman chauffeur and a family maid strike a deal to kidnap a wealthy woman’s son but things go wrong quick as a mix up at a pet store (which just happens to carry black mambas for some reason) gives the boy a deadly snake instead of a harmless pet creature to add to his collection of beasts.

The simple kidnapping turns into a hostage siege after they kill a policeman and must deal with the cops on the outside and the slithering terror on the inside that keeps moving from room to room hunting them all.

Be prepared for multiple jump scares of snakes doing snake-like things in vents, cupboards, liquor cabinets, floorboards and everywhere else. In fact, half of the film seems like we are just following the black mamba around the house without it actually doing much of anything. Luckily toward the end, we get more of a payoff and we get to see some of the criminals get their comeuppance in the form of some nasty snake vengeance!

You don’t find yourself rooting for a snake in many movies but with VENOM you actually want them to take out pretty much everyone. Not just the bad guys but the inept cops, the too involved wildlife expert, the whiny little kid and the even whinier mother. The only one that’s tolerable is the grandfather that happens to be an expert in dealing with African animals.

Overall VENOM is pretty enjoyable. What other movie will you see Klaus Kinski wrestle with a laughably fake rubber snake? So you never find yourself mumbling “I’ve had it with this MFing snake, in this MFing house.”

Plus it looks pretty damn amazing which is a testament to technology today given its age. The 2K high definition transfer makes VENOM look probably the best it ever has and as usual with Blue Underground videos, it contains a great deal of extras. Here we have the original, unintentionally hilarious trailers, a new audio commentary with the director, a collectable booklet featuring the original posters and trivia about the movie and much more.