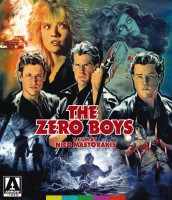 THE ZERO BOYS is so 80s it hurts. Filled with numerous clichés that filled the decade, the film takes them all and packs them into an action thriller. From the big hair, to the horrendous treatment of women as objects, to the loud synthesized music and bad outdated references, it is a time capsule for the decade in a variety of ways.

The film focuses on a group of paintball zeroes that worked hard and became paintball heroes calling themselves The Zero Boys pattern after the name other teams used to call them because they were so bad. But they trained in the mountains to be better and ended up becoming the best team EVER! Since then, they have been practicing but with real guns and trying to improve their status.

However, when the group goes to practice one weekend they pick the wrong place to squat in as it is filled with sadistic killers that use the place as their hunting grounds for any poor soul that happens to wander into it. But again, these guys are survivalists (sorta) so they use their training to fight back against trained killers that know the land and have placed a number of traps along the way.

Filled with a cast of nobodies, the only real person you may recognize is Kelli Maroney, who had a brief 80s career also starring in the decent NIGHT OF THE COMET and murderous mall robot flick CHOPPING MALL.

The action is all 80s with loud music blaring when anything goes down and with a limited budget not a lot happens in terms of the death scenes other than someone getting driven through spikes or sliced and diced.

This is from Arrow Video that has been taking old school films and converting them into modern 2K high definition Blu-ray. The cool thing here is that they always put good stuff in the extras and included here are new interviews with Maroney and other star Nicole Rio as well as an interview with director Nico Mastorakis and other legacy special features.