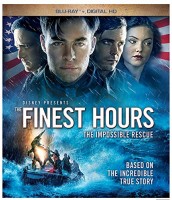 Interesting that Disney has done something that doesn’t involve their fairy tale franchise, Marvel or LucasFilm. Not often we see a standalone movie from the massive corporation that doesn’t have any ties to the stuff that makes it the big bucks.

But with THE FINEST HOURS we have an action film based on true events about the Coast Guard saving a merchant sea vessel after it gets split in half and those that survive are restlessly keeping it afloat. The visuals are pretty cool because how the hell does a boat stay floating after it has been sliced literally in half? It is a crazy thing to see and the special effects are top notch, naturally it is Disney after all.

Very interesting performance from Chris Pine (of STAR TREK fame) as a shy and unconfident man who is thrust into a situation where he must be none of these things. After seeing Pine star in a number of action flicks where he is the big dick in the room, it is good to see he can flip the switch to the other side if needed.

Unfortunately, THE FINEST HOURS lacks a lot of cohesion. There is a romance between Pine and another character we see quite often but the relationship is barely even shown. How they met, how they hit it off yes but other than that we spend a great deal of time concerned about this man and woman’s relationship when we haven’t invested much time at all in it on screen. Also, the action while at times is good, it isn’t great and there are far too few moments here. I label this an action drama rather than just a pure-play action flick because there is too much else it wants to be rather than just going full bore into the action stuff.

Overall, not a bad movie. If you enjoy naval rescues it is a decent one, albeit, almost anti-climactic in some ways. Luckily, there are some good extras on the Blu-ray version of the movie (DVD has little to nothing) including a look at the real town where the film takes place, a featurette on the crews of the ships, cast member interviews, featurette on the real Coast Guard that rescued the ship and a whole lot more.