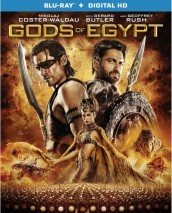 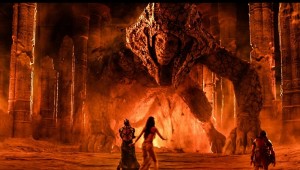 My experience with GODS OF EGYPT differs quite a bit from the lambasting it has taken from the critics when it first arrived in theaters, but I may have those same critics to thank for it. I had such extremely low expectations going in and that may have contributed to actually enjoying an amazingly over-the-top CG laden film that fictionalizes the powerful deities place among mortals.

When I first saw the trailers for GODS OF EGYPT I was amazed that here was yet another film about ancient Gods that looked like a cookie cutter action flick devoid of any real plot or substance. I think I fancied calling it JUPITER ASCENDING in the desert. And when it arrived in theaters, much of what critics said backed this up.

Yet viewing it on Blu-ray some things really stand out. Yes, the CG is so heavy throughout but it is really well done CG that looks damn good despite knowing it was all generated digitally. One thing that stood out in JUPITER ASCENDING (another ginormous CG movie that also was torched by critics) was that the CG never looked good. It was slick yes, but artificial in appearance. GODS OF EGYPT doesn’t feel that way. The environments are vivid, the cities and structures are beautiful. Only when it comes to the creature creation is when the CG has a letdown – and there are a lot of creatures in this so it isn’t all good.

The plot is a complicated mess with Nikolaj Coster-Waldau’s Horus battling for power of Egypt against mad god Set (Gerard Butler) after he sets out to kill every God in order to find the ultimate immortality (see because in this version, even Gods must face death eventually). So Set goes about hunting down the other gods Thoth (Chadwick Boseman), Nephthys (Emma Booth), Isis (Rachael Blake), Hathor (Elodie Yung) and others to steal their power so he can bring a huge beast to Earth to devour it. Somehow that means Set gains immortality … again it is a complicated mess.

But if you leave your brain at the door, it is a mess that is enjoyable just for the action and the ideas that are created that give a very alternate take on the ancient gods. Also Waldau does a decent job and so does his mortal sidekick Bek (Brenton Thwaites) that helps Horus at every step along the way to stop Set from his goal.

You can get the Blu-ray in 3-D format too if you wish but it really doesn’t need and the more expensive budget movies that come out the more I tire of the 3-D shtick. The Blu-ray also includes interviews with the cast, an on-location featurette, a making of featurette (which is interesting to see they actually did have some real sets and not just a green screen) and a featurette on the outfits worn by the cast.