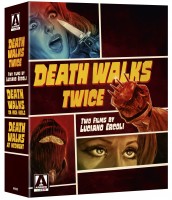 Arrow Video has putting out some really good titles over the past couple of years digging dip into the bowels of moviedom and coming out with rare gems that have been converted into high definition.

In the first film, DEATH WALKS ON HIGH HEELS, Navarro plays a cabaret dancer that is being hunted by someone looking to get their hands on stolen gems her dead thief father stole. Billed as a giallo (aka Italian slasher), it is nothing of the sort as it lacks the style and brutality that many of the other works (namely from legendary Dario Argento) bring to the table. Instead, it is more of a thriller with some giallo elements.

Unfortunately, it is also unintentionally hilarious. What we get in DEATH WALKS ON HIGH HEELS is:

DEATH WALKS AT MIDNIGHT is also not a giallo in the traditional sense. Once again Navarro is hunted—this time playing a new character (as do many of the actors from the first film)—after she takes some psychedelic drugs and witnesses a killing that happened six months ago. Somehow the killer learns she knows and begins hunting her as well … or does he? There is a twist in that the killing she sees was in revenge from someone being done wrong and the real danger is in those closest to her.

While DEATH WALKS AT MIDNIGHT does have its moments of hilarity (photographic trolling, bad journalism, calling the police after witnessing an attack only to hang up on them for no reason), it pales in comparison to the first film and seems to be much more serious.

Still, it is nice to see these older films thought lost now converted into a format unlike they have ever been seen before and it you are itching for something foreign horror related, you could do a lot worse.

The other cool thing that Arrow is doing is loading these Blu-rays with some great special features and this title is no different. There are introductions by screenwriter Ernesto Gastaldi, new featurettes on the making of the films, new interviews with the cast and crew and composer, audio commentaries from film critics, the soundtracks are included in the package and so are new booklets containing lots of cool gems for diehards. Based on all these cool things, the overall grade for the Blu-ray goes up not necessarily because of the actual films.