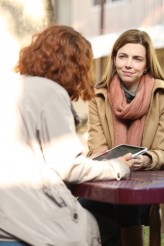 The exec producer talks working with the cast, shooting in Austin and more 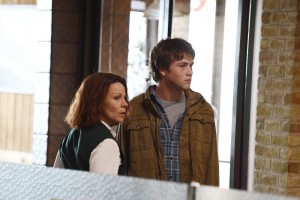 In Part 2 of our exclusive interview with Michael J. McDonald, executive producer of ABC’s award-winning AMERICAN CRIME (Wednesdays at 10 PM), he discusses the plot of the current season, which deals with an accusation of male-on-male rape among students at a prestigious high school, working with the cast, and more.

AX: The character of Kevin LaCroix, the high school basketball player portrayed by Trevor Jackson, is not suspected of being part of the rape, but he’s still in a lot of trouble. Is he being penalized for being “black while in proximity” to the crime?

MICHAEL J. McDONALD: He’s being penalized for being black, for being overage, and also supplying alcohol. It was his place [where there was a party at which the sexual assault occurred], he supplied alcohol to minors There is factual evidence that he supplied an environment and encouraged an environment where something like this could happen, and I think that as an adult, over eighteen, you’re held up to higher standards. If I had a party, and there were young kids there, and they were drinking and doing drugs, and one of them was assaulted, I would probably be in a lot of trouble. I would be arrested, I would probably be convicted of some sort of crime, because I did allow this. A consenting adult understands when you supply that – that’s where he’s really getting caught up. The idea is that he may not have actually had part of the sexual assault, but that does not mean that tangentially, he’s not part of the case.

AX: You have a lot of actors – Regina King, Lili Taylor, Timothy Hutton, Felicity Huffman, Richard Cabral, Elvis Nolasco – returning from Season 1 as different characters this year. Have the actors come and asked you to do anything particular with their characters? What kind of input do they have?

McDONALD: I think they had a lot of input. Not that they would ask for particulars, but there was a discovery of who these characters were, in conjunction with [series creator/ writer/ director/ McDonald’s executive producing partner] John [Ridley] and the other writers and the other directors, that there’s an exploration that the actors bring, of who these people are, what their back stories are. I think what John does so remarkably well is, he writes these wonderful scripts and then invites the actors and directors in to help build out the detail of these characters.

AX: AMERICAN CRIME also has a distinctive shooting style where, even if it’s a two-person scene, sometimes you’ll only see one person or you’ll see the one person and then part of somebody else’s face, and sometimes it’s in long-shot. What is the narrative thinking there?

McDONALD: I think it’s John’s desire to make it feel experiential, make it feel like you’re experiencing it as it happens, and as oftentimes, when you’re sitting in a room, or you’re listening to someone, you’re intently looking at someone, you’re intensely part of them, and they’re the focus of the scene, and they’re the important aspect of the scene. I think that it also gets you closely into their eyes and into their mouths, and that’s where emotion lives. The other part of it is, the people that are not focused on in scenes are oftentimes part of the establishment, the lawyers, the reporters, the doctors, the nurses, the cops, because as we’ve set up from the very beginning of Episode One, Season 1, the show is about the people and the families that are touched by these moments of violence and crime, and not about the people within the system. We never, ever have a scene with just two cops talking, or two lawyers talking, or the judge and the lawyer talking, or a nurse talking to a cop. You’ll never see any scene like that. All of our scenes are dealing with the individuals who are touched by it, and then their interactions with each other, and at times, interactions with the establishment, the people of the system.

AX: Your first season was set in California and your second season is set in Indiana. Why are you shooting the series in Austin, Texas?

McDONALD: We originally shot in Austin because it gave us a great opportunity to duplicate Modesto, California, and Indianapolis. There’s an incredible crew base there, there’s a nice tax incentive, there’s a good infrastructure there, and Austin is a very vibrant city. It’s also a city that actors are very open to relocating to – there’s music, there’s food. It’s very diverse in its architecture, diverse in its topography, and it was very easy to duplicate Modesto, California there. Modesto is a smaller city in the Central Valley without a lot of [film/television-making industry], whereas there’s a ton of amazing, smart and dedicated people in the industry who actually live and work in Austin.

AX: How did you feel about the reaction to the first season of AMERICAN CRIME?

McDONALD: I feel honored and blessed that people, the critics and some of our peer groups, have recognized the work we did. I feel like this season, people actually understand a little bit better how we tell stories. I think [Season 1] was so different than almost all broadcast television that it was actually a learning curve, and I think that we had some critics and some audience members just had a difficult time looking at our show. They were looking for the scenes of evidence, they were looking for traditional coverage, they were looking for resolutions and they were looking for black and white and heroes, and I think now in the second season, people understand that we’re trying to tell a reflective story about the grayness of people in America, and now people are really embracing this second season and are comfortable in our storytelling.

AX: In either season, has there been anything that’s particularly surprised you between when you knew the scene existed in the script and when you saw the final cut?

McDONALD: Oh, my God, every episode surprises me, because I read these scripts and I know and then oftentimes I’m on set, and I see them come alive. And it blows me away that there’s nuance and there’s subtlety to each and every word that these characters bring. And then when it goes through the editing process and the music and all that, they just come alive. Two scenes in particular were remarkably different than how I read them. One is in Season 1, which I will always talk about as a transformative moment in my career as a producer. There’s a scene between Regina King’s character and the mother of Audrey, a wonderful actress named Jennifer Savidge, who was actually a series regular on ST. ELSEWHERE years ago, who now lives in Texas. And she walks into the hospital and stops and sees Regina and they hug. Basically, that’s how it was written. I knew, “Oh, this will be emotional.” But it all came crashing down when I saw it happen. Regina didn’t want them to see her until that moment, and this was on the death of both of their loved ones, and that’s what the show is really about, is how these individuals from all different walks of life are touched by crime and violence in America. And to see that come alive at that moment and see Regina start crying and her lip quiver and Jennifer just melt into each other – it transformed me, as a producer, to see that with great words and great actors, life can be brought alive. And then in the editing process – I still almost tear up thinking about it, because I think it’s so reflective of America, that we’re all in pain because of crime and violence. Just so many families – there’s a silent army of families. And these two women, very, very different, who were at odds with each other – they just held on to each other and it was transformative.

And in Season 2 was the scene with Taylor getting the rape kit done on him and that’s never been seen before. I’d never even saw it before. And the words weren’t written so much in the scene, because John wanted a real sexual assault nurse to run the scene and say the exact words and I think that what we did was, Taylor, played by Connor Jessup, did not know exactly what she was going to say, and that’s one of the things that John does a lot is, he makes these moments experiential for the actors, too. He surprises them, so they’re kind of living through it. And to see and hear the graphic nature of what he was going through, and watching that tear roll out and him laying on that table, and there’s this nurse, who we never see – going back to [the filming choice of showing a single character in a scene], it was about him, but to hear the words that that woman said, and to know that there are men and women [who experience this in real life] – I’ve never seen a rape kit done really, and she did it from beginning to end, and we captured part of those moments, and you see that on television, and all you see is the side of his face. And that so surprised me when it was happening, because I had never experienced it myself, nor had I ever seen it.

McDONALD: Yes. John [Ridley] is writing and directing a project at ABC called PRESENCE, which is about a young woman of color, an Army vet, returning from Afghanistan and she becomes a kickass private eye in Los Angeles. I think we’ll still deal with interesting issues, but there’s a little bit more fun, a little bit more action and a lot sexier than AMERICAN CRIME.

McDONALD: To be honest, the thing I don’t think is written about enough or talked about enough is the diversity-reflected nature of every single member of the cast and crew, and that I think we’re the only show in America that seventy percent of our directors are women, a majority of our writers are women – I think that I would like people to know that not only is the show reflective [of diversity] in its content, it’s reflective in the people who produce it, write it and direct it, and I think that’s why it feels so real and feels so poignant and emotional, is because our directors and our writers and our crew are predominantly women and people of color, and that, I think is helpful. I just wish more people knew that, because I think it’s important to know that we’re trying to reflect society and people’s stories, and we have people who have lived those lives driving the show.

CD Review: I WAS A TEENAGE WEREBEAR soundtrack
PROMETHEUS Highlights this week in Blu-ray and DVD Releases
Movie Review: THE DISAPPEARANCE OF ELEANOR RIGBY: THEM
THE MAN IN THE HIGH CASTLE: DJ Qualls on the new Amazon series - Exclu...