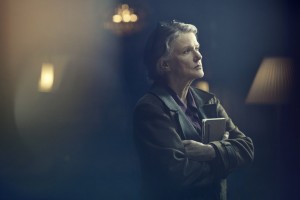 Barbara Sukowa has a decades-long career as an international film star. She’s worked frequently with Rainer Werner Fassbinder (the BERLIN ALEXANDERPLATZ miniseries, LOLA) and other major European directors. The German actress has also appeared in American productions, including the miniseries SPACE and features including JOHNNY MNEMONIC and CRADLE WILL ROCK.

At present, Sukowa is in her second season of playing temporal scientist Katarina Jones in Syfy’s 12 MONKEYS, Mondays at 9. Sukowa’s character is one of the people responsible for sending James Cole (Aaron Stanford) from a devastated 2043 to 2015 to prevent a plague that will destroy civilization. However, Cole’s efforts result in ever-shifting timelines that cause their own problems.

At a press event hosted by NBC, Sukowa talks about playing a character with a very non-traditional job.

ASSIGNMENT X: When you got cast in 12 MONKEYS, did you have a lot of questions about the time paradoxes?

BARBARA SUKOWA: Yes. I didn’t know anything about it. I read Stephen Hawking’s book, A BRIEF HISTORY OF TIME, and that helped me a bit. And of course, we have really, really nice writers, who I pestered all the time with questions, and they explained.

AX: Do you feel like you understand the show’s time paradox now?

AX: What is the key to playing a temporal scientist for you?

SUKOWA: Well, she’s definitely somebody who’s picked a field that is unusual. Stephen Hawking, for example, said when he used to talk about time travel twenty years ago or so, people didn’t take it seriously, but now, one does. She’s a physicist.

AX: And what is the core of Katarina Jones?

SUKOWA: I think the core of her – what you see her in Season 1 and 2, she had a very traumatic experience, she lost her daughter, and I think that is something that will be a determining factor in life for any person who has lost a child. She really, really, really just concentrates on her work, because I think emotionally, she is very, very distressed.

AX: I understand that some of this season was shot in Budapest …

SUKOWA: I wasn’t there. I’ve been to Budapest [before, but] I didn’t get to go.

AX: How do you enjoy working in Toronto, where most of 12 MONKEYS is shot?

SUKOWA: I love it. I think it’s very pleasant, and I’m very happy – we have a very, very nice group of people. The actors really have a great relationship and it’s a very nice crew, so that helps, no matter where you work.

AX: Did you have to do gun training for 12 MONKEYS? Had you fired guns before?

SUKOWA: No. I think I did once, a very long time ago, in a miniseries, but this was the first time. I was scared, I was really scared, carrying a gun around, which has blanks. But the character is fantastic. When she’s alone in that facility and has to fend for herself. That’s the great thing about these characters – it opens a whole new dimension. Characters can really expand. A book person, a scientist, running around with a gun.

AX: What would you most like people to know about Season 2 of 12 MONKEYS?

SUKOWA: I think Season 1 was kind of setting up the whole plot and the characters, but what I want them to know is that there is really something that is interaction of characters and relations. It’s about family, it’s about redemption, that it’s big in scope and covers a lot of territory. And it’s fun. It’s an emotional journey.