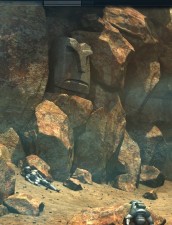 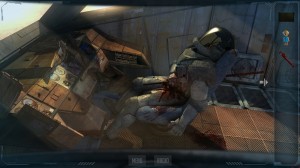 The era of remaking older games with a fresh coat of paint and then offering them to a wider audience is growing. Now, that applies to point-and-click webgames such as MORNINGSTAR: DESCENT TO DEADROCK which is coming to PC and Mac.

MORNINGSTAR has been remastered to include new high definition cinematics that take place mostly during the beginning and end of the game as well as during times when you accomplish a task. But also they have re-vamped and added some of the puzzles from the original game to extend the storyline and make it interesting for those that have already played it one time through.

Originally launched in 2009, MORNINGSTAR tells the story of a small crew on a small ship that gets hit by a gravity well that sends the ship falling toward a desolate planet. You play as Powell who wakes up mid crash and discovers his captain has taken a spear through the gut and must take control the ship as it descends but it is too late.

After the crash, you wake on a desert planet devoid of life except for a larger, better equipped ship that has also crashed on the planet. But soon you discover the crew of that spacecraft have been killed. The captain is alive but unable to function after being severely injured and Powell must figure out a way to fix the ship and discover the mystery behind the gravity well that is causing ships to crash. Thus the adventure begins.

As with most adventure games, a lot of trial and error is at hand where you have to determine if the items you pick up either go together or can work on any of the damaged ship parts or use them to find something lodged in a hole or a rope to scale down a gorge or a handful of parts to create a carbon dioxide filter.

After fixing the ship but still needing parts to get off Dead Rock, the storyline is told through log entries from the other crashed ship that encountered a number of alien fighter ships after being caught in a gravity well that cause the crash to begin with – the same gravity well that caught your ship. Through these logs, you discover more locations and more secrets to what the planet holds and ultimately your way off the rock.

One the weaknesses of MORINGSTAR is the voice-over acting. The guy who voiced Powell is pretty awful. He deadpans almost everything. There is not excitement in his voice, nor fear, nor humor or any other human emotion. It’s as if the guy is an automaton. Surprisingly, the Captain, is the only other voice we hear other than a computer at differing times, has a better control over his emotions than the guy we must hear plod on and on about how “this doesn’t fit in there” or “I can’t merge this fish with this pulse generator.” Now all adventure titles have these same lines but the monotone and relaxed delivery given the dire circumstances gets tiresome.

Clocking in at anywhere between one hour and three hours of gameplay it isn’t a long game but it also is fairly cheap and the science fiction hook may be enough to garner interest from people that enjoy these type of games.