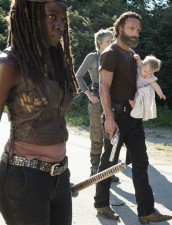 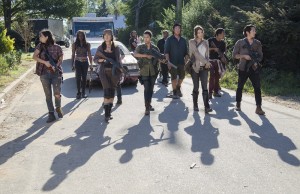 THE WALKING DEAD continued to recoil from a handful of mediocre episodes with back-to-back entertaining episodes that have introduced the audience not only to a handful of new characters but an entirely new and different area for the survivors to call home.

In “Remember,” Alexandria is everything that Aaron (Ross Marquand) said it was and maybe more. Safety behind high walls, the comforts they have been missing for so long (including running hot water and even some electricity) and large houses that the entire crew can live in. But for some, coming from the turmoil of the last few seasons – including the cannibals at Terminus, the chaotic hospital in Atlanta and having to scavenge for any water and food they can find – it is hard to adjust to these new ways.

Rick (Andrew Lincoln), who was maybe the most hesitant to give Alexandria a chance, struggled initially to believe what they were seeing was actually true eased into the surroundings, taking a shower and shaving his huge beard … leaving almost an entirely new person in its wake. Very interesting to see Lincoln turn from the haggard person we have seen over the past few years to a clean cut nearly respectable gentleman.

Soon, however, he begins to think that what they have in Alexandria may be something they can if not convert the inhabitants into strong survivors or they will take it from them – showing that Rick hasn’t at all giving up that bit of hardcore survival instincts he gained during his time out in the wild. The introduction of Deanna (Tovah Feldshuh) is interesting as well as she seems to have a strong grip over the community but is very willing to let strangers not only in the doors but in powerful positions. After only a short time in the community, she appoints Rick as constable and Michonne (Danai Gurira) as his deputy.

Some are having a more hard time adjusting, specifically Daryl (Norman Reedus) who maybe was outside any comfort for too long as he can’t even bother to take a shower and can’t help killing a possum for food when he sees it, even when food is readily available. How this plays out will be an interesting aspect because Daryl is unique in the TV universe as we don’t know what role he’ll play moving forward although it is bound to be an important one given what has come before and his extreme popularity on the show.

What I liked most about “Remember” is that for the most part it was taken nearly identical to how it was established in the comics. There are seeds of what is to come with Rick and the hairdresser, there are seeds to Rick establishing his Ricktatorship inside the walls and the interactions of the characters with the new players on the show were nearly identical right down to Glen’s (Steven Yeun) first adventure with the scavenging crew that shows they have no idea how to really survive outside the walls. Even the establishment of Rick and Michonne as constables was something that the comics had. While much of the TV universe has altered in some ways either the characters or the storylines, how the end up being presented is quite similar to what happened in print and this episode really shows that it works when all the pieces fall into place.