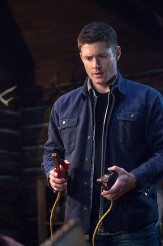 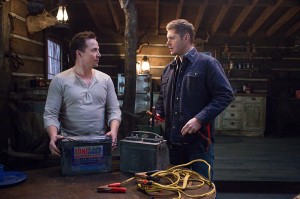 Sooner or later, most action TV series have the old Army buddy episode. This would seem to be difficult on SUPERNATURAL, since neither Sam (Jared Padalecki) nor Dean (Jensen Ackles) has served. Furthermore, with all the flashbacks we’ve seen, it’s getting harder and harder to bring in any significant past relationships we don’t already know about. Castiel, of course, has served as part of Heaven’s Host, but that’s not exactly the same thing, and while any military service of Crowley’s would likely be a hoot, it would likely be far from the tradition.

Not to worry. When Sam and Dean go to investigate a rash of strange murders/suicides in a small town in “The Things They Carried,” Cole Trenton (Travis Aaron Wade) arrives shortly thereafter. Cole, for those not following Season 10 all that closely, is the fellow who, as a youngster, saw his father killed by Dean. Cole’s father was possessed by a homicidal something or other, but Cole didn’t know it at the time. Several violent confrontations later, Cole now believes there are things that go bump in the night.

Cole is also ex-military, so he’s where the old Army buddy plot comes in. Yes, it’s a reach. While on assignment in the Middle East, Cole and his pal Kit Verson (Richard de Klerk) were part of a rescue mission that went south when the American soldier being held captive behaved like a monster and had to be shot by his own people. After meeting the Winchesters, Cole now has a much better idea of what probably happened, but the now-dead soldier was not only violent but contagious. A water-and-blood craving creature with tentacles and claws takes up residence in a host body, causing the person to dehydrate and crave liquid at all costs.

After a mixture of electrocution and other near-death techniques, Dean is able to expel the critter from Cole’s body and then stomps the thing. Kit is too far gone and Sam has to kill him. Cole is grateful to the Winchesters for saving his life and for stopping the spread of infection, but he hopes he never sees them again.

Because of both his history with Dean and his manner, Cole is a moderately interesting character. If he’s being groomed for the much-touted spin-off, SUPERNATURAL could do (and has done) worse. Still, the episode seems to be taking the long way round to create an emotional connection with the can-he-be-saved Kit – yes, Dean’s been through the wringer a little more than usual lately, but he and Sam are both still usually in favor of rescuing/exorcising those who can be rescued/exorcised.

“The Things They Carried” does have some nice grace notes, like a bit where the local sheriff offers the boys some birthday cake that Dean would dearly love to taste, but Sam declines for both of them. Otherwise, it’s a decent procedural episode with a good gross monster and some convoluted but not uncommon emotional entanglements.