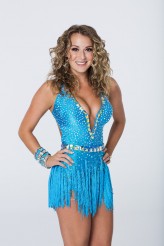 TV Review: DANCING WITH THE STARS – Season 21 – Week 5 – Switch up Night – No elimination

There is a new leader on DANCING WITH THE STARS: Season 21 – Week Five – Switch-up Night and her husband could not be prouder, even if she beat him. Yes, Alexa PenaVega and her switch-up partner Derek Hough nailed the first perfect score of the season, while PenaVega’s husband, Carlos, with Lindsey Arnold, came close to perfection with a 39. Guest judge Maksim Chmerkovskiy added some refreshing bluntness to the dance competition calling out contestants who he thought had a shot at winning and those who maybe didn’t. Hough’s regular partner Bindi Irwin came in third with 37 points while dancing around the ballroom with her switcheroo partner Val Chmerkovskiy. And even though last placer Paula Deen had a far from perfect score she still garnered her highest score with innovative dancer Mark Ballas who Jived her to a respectable 26 on the dance board. Next week, back to their original partners and another elimination. Stay tuned.

Nick Carter (singer/actor) and his partner Witney Carson (Sharna Burgess)
Not his best. Inaba said he was consistent. Chmerkovskiy said his Paso Doble was not his cup of tea. Hough said he overdid it a bit. Tonioli said it was rock n’ roll.
Scores: Inaba – 9, Chmerkovskiy – 8, Tonioli – 9, Hough – 9, Harland – 9

Alek Skarlatos (army Nat. Guard Spec./hero) and his partner Emma Slater (Lindsey Arnold)
Great connection. Inaba gave them the thumbs up. Chmerkovskiy called him the dark horse. Hough said he is so close to being a contender. Tonioli said he needed to caress the Rumba.
Scores: Inaba – 8 , Chmerkovskiy – 7, Tonioli – 7, Hough – 7, Harland – 8

Who went home: No Elimination
Who Has Legs To Take Home The Mirror Ball: Bindi, Nick, or Alexa