The two-hour event pulls off the seemingly impossible 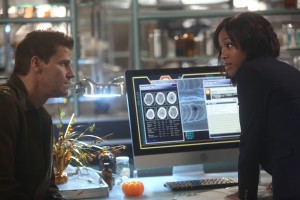 There have been abundant interviews confirming the fact cast members as well as viewers had an initial reaction to the news of a BONES/SLEEPY HOLLOW crossover that was, “How can this possibly work?” Yes, the two shows are now on the same night – one of the reasons Fox Network executives proposed this – and yes, pretty much anything can and does happen on SLEEPY HOLLOW. However, BONES, now in its eleventh season, is based in forensic science and law enforcement. It may bend the rules of some of these (what it’s done with the psychiatric profession is arguably less credible that homicidal ghosts), but it certainly doesn’t have headless horsemen and curses and time travel and all of the other elements that make SLEEPY HOLLOW the weekly Halloween extravaganza that it is. 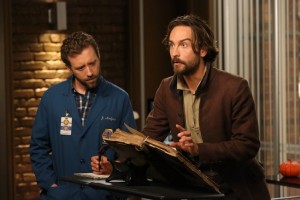 Of course, both series succeed as well as they do because of their character/actor combinations. (There are plenty of procedurals and supernatural series that fade away because not enough viewers take the human factor to heart.) Using this as the basis, the writers on BONES and SLEEPY HOLLOW have figured out a way to create some fun interactions between the characters on both shows, without unduly disturbing the vibe on either.

On BONES, the remains of a young woman are discovered underneath the floorboards of an abandoned church – and underneath her, there’s a coffin containing the corpse of a headless Redcoat soldier. While Brennan (Emily Deschanel) and Hodgins (TJ Thyne) are characteristically excited by the antique find, their main inquiry is into the recent murder.

Then FBI agent Abbie Mills (Nicole Beharie) and her “historical consultant” Ichabod Crane (Tom Mison) show up, wanting to take the Redcoat’s body back to the town of Sleepy Hollow in upstate New York. As SLEEPY HOLLOW viewers know, Ichabod Crane actually was a soldier/spy in the American Revolution who quasi-died at the time and was reawakened a couple of years ago; Abbie is a real, if newly-minted Federal agent, who until recently was with the Sleepy Hollow PD. It turns out that Booth (David Boreanaz) knew Abbie’s mentor, the late August Corbin, and therefore is willing to trust her. However, since the Redcoat’s remains may contain evidence relating to the murder being investigated, Brennan isn’t about to turn them over until she’s solved the current case.

There aren’t exactly dueling sensibilities on BONES, even if Ichabod displays an astonishing grasp of Revolutionary War-era minutia. After all, the Jeffersonian team is accustomed to confident experts who can identify within a few yards where a particular fragment of leaf came from, so why should their sensibilities be disturbed by a historian with a precise grasp on his area of specialization? Apart from one detail that pricks Brennan’s curiosity but never causes her to wonder if there’s a truly exotic explanation, nothing happens in the episode that wouldn’t happen normally. The Redcoat skeleton is germane to the case, but nothing supernatural is involved.

Brennan and Ichabod do engage in some faith/reason discussion, but this sort of discourse is absolutely customary on BONES. Actually, the potential fun pair here is really Hodgins and Ichabod, who have a kindred sense of wonder, but unfortunately have little screen time together.

The body of General Howe takes on considerably more significance (and activity) in the SLEEPY HOLLOW episode. Ichabod and Abbie find themselves facing a zombie army, courtesy of Pandora (Shannyn Sossamon). They wind up needing to confer with Brennan and Booth, who don’t quite see the urgency of the situation (since Abbie and Ichabod avoid mention of the zombie army), but help out anyway. There’s a fairly cool action sequence.

Putting BONES and SLEEPY HOLLOW together is a little like a narrative game of chicken. Fortunately, both shows survive intact, without damage to the universe of either one. Yes, it does feel like a stunt, in that there isn’t something so much fun or so wonderful that it was worth going this far out of the way to achieve it, but there is something entertaining in seeing how the pieces are made to fit together.