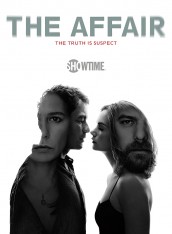 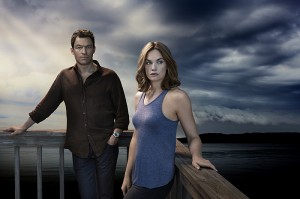 In Showtime’s THE AFFAIR, now in its second season Sundays at 10 PM and renewed for a third, we see the story unfold from multiple points of view. In the first year of the show, created by Hagai Levi and Sarah Treem, we see what happens unfold from the perspectives of Noah, a married-with-children novelist played by Dominic Wilson, and Ruth Wilson’s character Alison, a Montauk waitress whose young son died in an accident. In Season 2, we also see events through the eyes of Noah’s wife Helen, played by Maura Tierney, and Alison’s husband Cole, portrayed by Joshua Jackson.

ASSIGNMENT X: THE AFFAIR is perhaps the only show with multiple viewpoints where the aim is not to get the audience to solve a mystery, but just to show the differing perspectives of  multiple characters …

TREEM: I think the idea was definitely to break some new ground. I think that [both the actors and creative team] have a deep belief as artists that that is just true to storytelling, that a p.o.v. is just a p.o.v., that there’s no such thing as objective truth in telling stories, that anybody who tells a story is going to influence the telling of it based on who they are. So we were always excited about that idea from the very beginning, before anything else even came on board with this show. And then in terms of Showtime’s involvement, I think that’s what excited them, but I also think they were excited about the idea of THE AFFAIR.

JEFFREY REINER: It’s no mistake that one of the narrators is a writer. So storytelling and how you choose to tell a story is everything. It’s a novelistic approach. In novels, you can be nonlinear, you can be much more subjective. But we really don’t care what’s right or wrong. We really don’t. We have no interest in that at all. To me, it’s experience, it’s the strength of what drama does. You get into a person’s head, you get into how they react to certain things and what their journey is through life. So what better way to do it than to throw it through different points of view?

REINER: Well, let me ask you something. When you think “sex,” there’s nothing more subjective in human experience than sexuality, right? Even if it’s perfect, people are going to have radically different views. You can go eat a meal, both taste the wine and it can get pretty close. But sex is so frigging personal, and that’s what our show’s about. It’s not about the sexual journey, but it’s about the personal journey and an emotional kind of recall through that.

AX: But why it happened and how everybody felt about it afterwards …

REINER: Well, exactly. Why did you enter this? We talk about it all the time. Why am I doing this? So I would discuss it. Why are you doing this? What is missing in your life? The second thing is, how do they react to it?

REINER: I’m pretty sure it was, yeah. I mean, it didn’t start off at the beginning, but it was apparent pretty in the first season that we were going to expand to the four different views.

REINER: Oh, yeah. There’s a big difference. A lot of times, when you’re in the other point of view, you’re servicing their story. So sometimes your through-line or your motivation is a little more hazy. When you’re on your own and it’s your point of view, it’s much more clear of what you want and what you need. So it’s easier. Obviously, you feel a lot more invested in a way.

AX: How do you direct actors to play scenes when it’s not their character’s point of view?

REINER: You don’t. You have to make them believe, still, that they have to find their character in that as well. So they have to do the same amount of homework to make it rich. It’s something we struggle with on the show all the time. If all you’re doing is supporting some other person’s point of view, then the performance is not going to feel rich, it’s not going to feel seated. We discuss it all the time – “Why am I doing this?” It can’t be because we’re servicing that story. The characters have to discover. It’s the same process.

AX: So when you’re directing, for instance, Dominic West in the scenes where it’s not Noah’s point of view, do you say, “You’re doing this here because Alison thinks …”?

REINER: No. You never do that. An actor can’t do that. They’ve got to create their own narrative, their own narrative, their own “why” as well in order for it to be truthful. Ruth and I struggle with this all the time. “You’re supposed to be a little flirtatious in this scene.” But she can’t just play that, she has to play why is she being flirtatious, what is the deeper secret? It’s called subtext, and the subtext has to be true and it has to be rooted.

Well, let’s take for instance [Alison’s dead child] Gabriel. Her loss of her son is an absolute truth. How she reacts to it in her own life and how she reacts to it in Noah’s life is different. So I just tell the actress, “In your story, it’s grief. You’re not feeling good about yourself. In his story, it could be, you’re trying to move on with your life, or you’re more reckless in your behavior.” Gabriel still died in both versions. So she can’t play it like he didn’t die. That would really f*****g with the audience. Then we would be very disingenuous.

AX: But in Noah’s version, it’s like, if he just does the right thing, she’ll come out of this, and in her version, this is …

REINER: Hard to come out of. Right. And eventually we start stripping away things, and their own personal journeys takes over the storytelling. And I think the audience will recognize that. And that’s what the four points of view are really helping with.

AX: Do you have a scene or an episode that you’re proudest of in Season 1?

REINER: I think Episode 9, the one where Alison essentially walks into the water and she goes to the doctor and breaks down. I’m very proud of that and we’re all proud of that episode. Ruth Wilson is just stunning, I think she’s stunning in it.

REINER: Well, I’d like people to know that they’re going to have the opportunity to watch Maura and Josh expand the points of view in the show and in a treat to watch these actors deliver the goods. It’s some of the best acting I’ve ever seen on television.

TREEM: That it’s going to be great.

This interview was conducted during Showtime Network’s portion of the most recent Television Critics Association press tour.

Related: Exclusive Interview with Joshua Jackson on Season 2 of THE AFFAIR