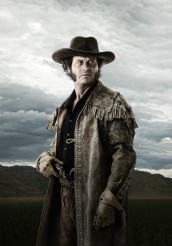 The actor talks about playing his real-life relative 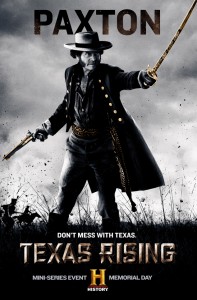 In the History Channel’s miniseries TEXAS RISING, Monday nights at 9 PM, the Alamo has fallen and Sam Houston, played by Bill Paxton, has to simultaneously hold off the Mexican Army and calm down his own men, who don’t understand why Houston won’t let them attack.

Paxton has plenty of experience playing military types, from a Colonial Marine in James Cameron’s ALIENS to turncoat Agent John Garrett in an arc on AGENTS OF S.H.I.E.L.D. Other significant projects have included starring in five seasons of HBO’s BIG LOVE, as famous feuder Randall McCoy in History Channel’s HATFIELDS & McCOYS, a co-starring role in Cameron’s TITANIC and directing and starring in the feature thriller FRAILTY.

A Texas native himself, Paxton says he felt a sense of responsibility playing the namesake of the Texas city of Houston.

BILL PAXTON: This meant a lot to me, being from Texas and actually being related to Sam Houston, so I was in earnest the whole time. I did a lot of research. I had to work within the context of a historical fiction, but there’s a nice story between Deaf Smith [Jeffrey Dean Morgan] and Sam Houston. [TEXAS RISING is] not just the Texas Revolution, it’s also the inception of the Texas Rangers. [Houston is] considered kind of the father of the Rangers. They were the king’s guard, the Rangers – they were his scouts, they were the ones he trusted the most. There was a lot of conspiring against Houston. He was besieged not just by an [external] enemy, but all around him, because they wanted him to fight and he wouldn’t fight, because he knew it was suicide. So I found a line, I found one reference that Houston says in regard to Deaf and it kind of gave me the whole thing. He said, “He was my stay at darkest hour.” That’s a beautiful thing, and actually, I get to use that line.

AX: Do you like doing to research involved in playing a historical character?

PAXTON: Well, you have to research whatever the period is, whether it’s historical or fiction, but with this, I started doing all of this research, and you can get yourself into a bind. You have to play, dramatize what the script is. You can try to influence that a little bit, but at a certain point – I mean, TITANIC is historical fiction, even though it’s a true story, but there was never any Jack and Rose. But we watch that movie and we go, “Wow, that’s how the ship sank.” So it’s dramatized.

AX: What else would you like to say right now about TEXAS RISING?

PAXTON: Coming out of the eighteenth century and the early nineteenth century, there’s still that eighteenth-century influence in the wardrobe, the dress, the way they speak, and that was fascinating. And the production is so luscious – I mean, the cast of thousands, the art direction, everything. I was very worried that it wouldn’t live up to the script, but it did and we were so lucky to have [director] Roland Joffe, who really knows how to create spectacle in terms of choreography. It was crazy. We’d be doing a scene like this, talking, and there’d be five layers of extras and if somebody screwed up, three hundred people had to go back to one [the first position of the scene] if you flubbed your line. So they’ve gone to a great length to create a complete world. This is going to be an event television series.

This interview was conducted at the History Channel’s event for the Television Critics Association at Pasadena’s Langham-Huntington Hotel.