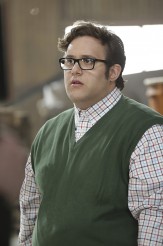 The actors talk about their genius characters 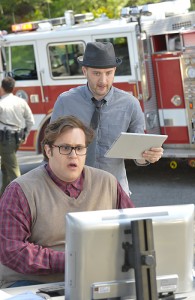 CBS’ SCORPION, now in its first season Mondays at 9 PM and renewed for a second, is based on the life and work of Walter O’Brien. The real Walter O’Brien, who is one of SCORPION’s executive producers, really does have a sky-high IQ, really does recruit fellow geniuses to work for his Scorpion Computer Services company and really does help the less socially skilled ones to become better at interacting with their fellow humans.

On the series SCORPION, created by Nick Santora, Walter, played by Elyes Gabel, and his now-still-small group of associates work on all sorts of cases that often put them in life-threatening predicaments.

Eddie Kaye Thomas plays Toby Curtis and Ari Stidham plays Sylvester Dodd, both loyal members of Walter’s team. Native New Yorker Thomas has a lot of feature credits, including playing Rosenberg in all of the AMERICAN PIE and HAROLD & KUMAR films, and was a series regular on OFF CENTRE, ‘TIL DEATH and HOW TO MAKE IT IN AMERICA, as well as being part of the voice cast on AMERICAN DAD! Californian Stidham was a regular on HUGE, as well as a guest star on numerous series, and is also a musician.

The two SCORPION cast mates are hanging out together at a party thrown by CBS for the Television Critics Association, so they give a joint interview.

ASSIGNMENT X: When did you get involved with SCORPION?

ARI STIDHAM: I got involved in March [2013], about a day before the pilot started shooting, a very quick audition process for me personally, and then I was just brought on board and started up.

EDDIE KAYE THOMAS: I believe I auditioned in early February, and it was not a quick audition process, and then we started shooting in March.

AX: A lot of people who are mathematical geniuses are somewhere on the Asperger’s scale. Have you done any research into whether your characters are on that scale, and if so, where they would be?

THOMAS: I don’t think my character has Asperger’s. I think my guy does pretty well with dealing with the world.

STIDHAM: Yeah, I’ve done some research. I don’t know exactly where he falls on the spectrum, but I think probably milder. His issues are more with social anxieties. He has [figuratively] exposed nerve endings, so he empathizes a lot, almost too much, with people. So I wouldn’t say he’s on the spectrum, first and foremost, but that’s definitely a part of his genius.

AX: What are your characters’ areas of expertise?

THOMAS: We all have very specific talents. I’m a behaviorist, so I can read people, no one can really lie to me and I can see what’s going on in a situation, so nothing’s going to get by me in terms of behavior.

STIDHAM: I play a statistical guru, so it’s more about numbers. Instead of the probabilities, it’s the potentialities that I can compute and see how any situation could play out. I can see all of the scenarios and decipher which would be the best one for a criminal to take and say, “That’s probably what he did, he exited the building through this way, et cetera.” That’s the strong suit, statistics.

AX: Do either of you have any of these skills in real life?

THOMAS: I don’t have any of these genius skills. I am nowhere near a genius and I’m excited to keep learning every week, because every time I read one of these scripts, there’s a lot of stuff I’ve never known before about. So it’s been exciting to try to get a bit closer to being a bit smarter by playing this role.

STIDHAM: Yeah. I’d say I’m a little bit like Sylvester just because I’m a bit of a perfectionist in my head, but I certainly don’t have OCD – it’s self-proclaimed that I have OCD, but I’m not diagnosed. But ditto what Eddie said – I’m super-excited. Every week, I want to learn more and more about how to play this guy with issues and how he overcomes them and I want to be truthful to that stuff.

AX: Have either or both of you talked with the real Walter O’Brien?

STIDHAM: Yeah, he’s on set a lot, so that’s been very helpful. My character’s based on a computer, so I really didn’t have much to go off of, and he broke down what the computer does and the potentiality stuff, and then really helped me get into the mindset of people on his team, because he has large team of geniuses under Scorpion Computer Services and his other companies, and a lot of them have the intense social disorders that Sylvester has, so I got a bit of a curve on that in talking to him. Nick Santora has been helping me out a lot more with the character stuff, but [O’Brien] is around and he’s made himself readily available to us.

THOMAS: I got to have dinner with the real Walter O’Brien, and it was one of the most mind-blowing, brain-frying three hours of my life. He’s a fascinating human being and I’m so excited that we’re [introducing] him to America, because he’s a very special, unique, unique as in one in one-point-five billion people, and I’m really honored to get to know him.

STIDHAM: Walter says that this show is important. He said that to Eddie, and Eddie has been saying it today. I think Walter’s really important. I think he’s very important to us and to our country and to the world. He’s a real hero.

AX: One of Walter O’Brien’s skills is reportedly a kind of Sherlock Holmes-style “reading” of people, that he can tell all sorts of things about you just from meeting you. Has he “read” either of you?

THOMAS: That’s a really hard part of hanging out with him. I hang out with him and I assume he knows exactly what’s going on at all times, but at the same time, he doesn’t seem like it. I mean, he might have, but I don’t know. He’s smart enough to not tell me if he did or not. He’s been wonderful and very gracious as a producer.

AX: And how is working with Nick Santora?

THOMAS: Nick Santora is so passionate about this project, and I love his energy and vibe and I feel like we’re in good hands.

AX: Justin Lin, who did the FAST & FURIOUS movies three through six, directed the SCORPION pilot. How was working with him?

THOMAS: I got to be chased by a GTO in a scene directed by Justin Lin, which was one of the most exciting few hours of shooting I’ve ever done.

STIDHAM: I didn’t have any stunts in the pilot, but I have some really cool stuff [in other episodes]. So I’m excited. To answer a previous question, I don’t think I’ve ever worked with a writer like Nick Santora. He really lives and breathes his characters twenty-four/seven. And he’s made himself readily available to us. Before the [second episode] read-through, he called me – I think he called a lot of us just to make sure we were all on the same page about what was going on, and he’s great. [Santora’s co-show runner/fellow executive producer] Nick Wootton is also one of the smartest people I’ve ever met. They’re a great team.

AX: You also have a very young fellow regular, Riley B. Smith, who plays Ralph, a genius little boy with Asperger’s. How is it working with him?

STIDHAM: Oh, he was great. [Smith is] not on the spectrum. He’s just a little boy, and he’s great. He’s a pleasure to work with, very sweet, very kind. Somebody taught him how to act. I don’t know who did it, but they really did it. He knows what he’s doing.

AX: Do either of you have any other projects we should know about?

THOMAS: Yeah. I’m doing the HAROLD AND KUMAR animated series, and then I did a miniseries for DirecTV called THINGS YOU SHOULDN’T SAY PAST MIDNIGHT.

STIDHAM: I’ve got an album coming out under Dr. Television, my surf rock band. And that’s about it.

AX: Do either of you have anything else you’d like to say about SCORPION?

THOMAS: Don’t take my word for it, just let the show speak for itself.