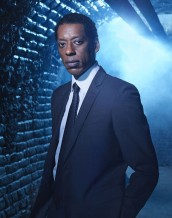 The actor talks coming back from the dead 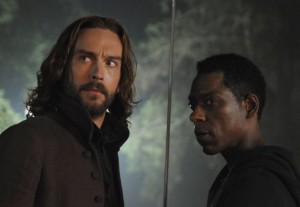 It’s been an eventful season for all of the characters on Fox’s SLEEPY HOLLOW, which has its second-season finale Monday, February 23 at 9 PM. Things have been especially hairy for Orlando Jones’ character Frank Irving.

The erstwhile police chief of the small, supernaturally-beset town of Sleepy Hollow started Season 2 in jail for a murder actually committed by his temporarily demon-possessed little girl. Then Frank got a lawyer – Henry Parish (John Noble) – who Frank had no way of knowing was allied with the demon Moloch. Henry got Frank transferred to a mental institution and then tricked him into signing away his soul. Frank escaped and bravely gave his life fighting Moloch.

And then he came back. Hey, this is SLEEPY HOLLOW. It happens. Frank flickered between being demonic and distraught himself post-resurrection, but he seemed freed after last week’s episode. Of course, if Abbie (Nicole Beharie) and Katrina (Katia Winter) change the past by having traveled to the Revolutionary War, the present as we know it may cease to exist.

Actor Jones, both a SLEEPY HOLLOW series regular and an ardent, outspoken fan of the show, talks about Frank’s return from the dead and other aspects of the show.

AX: During the midseason break, you gave a lot of interviews that suggested Frank was dead and that you were at peace with that. Were those interviews fun to do?

ORLANDO JONES: I don’t know if I’d call it “fun,” because I’m a fan, so I don’t like being disingenuous to the fans. But [the edict was] I can’t tell, so I have to be at peace with it.

AX: When Frank died, did you think he was dead-dead, or did go, “This is SLEEPY HOLLOW, other characters have come back from the dead, I’m not worried”?

JONES: We were about four or five episodes in the can, so it was hard for me to believe I was dead, because I’d already shot the other episodes ahead, so I already knew. But I did think there was something crazy about that storyline. I mean, my fear was that trying to set up all the characters, all the stuff present-day two hundred years ago – witches, demons – I mean,  there’s so much going on, I was fearful that no one would give a sh** that he died, because you didn’t really get an opportunity to see him in the early part of the season, so I was shocked that people even cared.

The second half of this season is I think a lot more in keeping with what the fans were hoping for, because the writers were listening and they have absolutely looked to correct issues. But when you’re five episodes ahead of what you guys are seeing, then you can do it. Certainly, they do care and they absolutely are looking to respond to a lot of the fans, and frankly, they love the fact that fans still care. So I’m hopeful about this show and excited for the second half of this season that, as a Sleepyhead, I’m excited to be able to talk about and share and have people be like, “Get the f*** out of here.” It’s the most awesome of awesome.

AX: You are a very prolific live Tweeter when SLEEPY HOLLOW episodes are airing, and very active on Twitter overall on the show’s behalf. How are you enjoying SLEEPY HOLLOW Tweeting experience?

JONES: I love interacting with the fans of the show. It’s super-fun, and the network is crazy supportive of it and I get to troll my own show. How awesome is that? [laughs] I mean, come on. The fact that this is happening is crazy to me. It’s a good time.

AX: When Fox executives spoke with the press earlier, they said they were looking for SLEEPY HOLLOW to become a little less serialized in its storytelling. How do you feel about that?

JONES: You know, I think SLEEPY HOLLOW really lives and dies on the interactions between the characters. I think the hope and the promise of SLEEPY is really based on, it has really strong female characters. It really sort of cut its teeth with that, and if we can maintain telling those stories without compromising that, I’m not so concerned about whatever format the Powers That Be want it to be. I’m more concerned about finding out what happens next.

For me, SLEEPY is funny, a lot of action, historical, Biblical, a lot of characters. This show is ambitious. It always has been. Trying to put a summer blockbuster on television [as an episodic weekly series] is a crazy-assed idea. But I always expected that we would succeed and we would fail both at the same time, and I realized that there would be growing pains. I can tell you with great certainty that SEINFELD was not the show in Season 2 that people talk about as being one of the greatest shows in television history. That really happened at the end of Season 3. I think for THE OFFICE, it happened as late as Season 4. That’s part of the complication of figuring it out. I think what’s exciting about SLEEPY is, everybody behind the scenes still loves that show. It has one of the most passionate, incredible fan bases I’ve ever seen. I really hope we tell the story of these characters. If we did that right, we’ll be great. If we did it wrong, we’ll go away.

This interview was conducted at Fox’s party for the Television Critics Association press tour at the Pasadena Langham-Huntington Hotel.