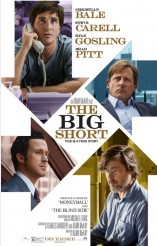 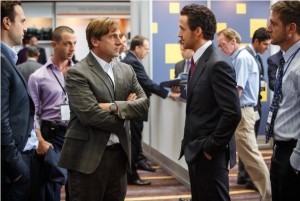 For many of us who are neither economists nor involved in the financial industry, the details of the 2007-2008 mortgage crisis that also decimated a lot of banks and a notable chunk of Wall Street remain a bit blurry. THE BIG SHORT is now here to bring much of that into sharper focus, and if the film doesn’t answer every single question, it still makes a lot of the information not only coherent but actually riveting and even entertaining, in a dark down-the-rabbit-hole fashion.

The film is partly narrated by Jared Vennett (played by Ryan Gosling and reportedly based on real-life trader Greg Lippmann), an American trader with Deutsche Bank. Vennett catches on quickly when Dr. Michael Burry, MD (Christian Bale plays the real-life figure), a former doctor with a genius for numbers, starts examining the thousands upon thousands of individual mortgages bundled into what are known as “financial instruments” that were being sold as AAA stocks. The problem was that mortgages that weren’t being paid were being sold as though they had value.

Trying to explain what follows in THE BIG SHORT runs the risk of making it sound forbidding, when it’s actually akin to something as accessible as THE OFFICE, albeit with much more at stake. Characters casually shatter the fourth wall and talk to us directly, or introduce celebrities doing incongruous things as they present concepts to us in bite-sized pieces.

Nobody on view here is motivated by altruism. The heroes are mostly defined by the fact that they have intelligence and logic going for them, as well as, in the case of Steve Carell’s Mark Baum (a stand-in for real-life hedge fund manager Steve Eisman), a sense of genuine outrage. Baum’s fury serves a number of purposes. First, it paves the way for us to understand why the situation is so scandalous and dangerous to ordinary mortals operating far below the rarefied air of wealth where the trades are being made. Second, it gives us someone who is at least nominally on the side of rationality and civilization. Third, it’s consistently fun to observe, as there are moments when it looks like Baum may spontaneously combust.

Brad Pitt, one of the BIG SHORT’s producers, has a supporting role as a former Wall Street insider who is now so distrustful of everything that he’s growing his own vegetables. His character is another voice of conscience, but this is tempered by his eccentricity, which is so sober that it becomes funny.

Director Adam McKay, who wrote the screenplay with Charles Randolph, based on Michael Lewis’ nonfiction book, is known for his all-out comedies like ANCHORMAN and THE OTHER GUYS. Those comedic instincts serve him very well here, keeping what could be a very dry subject always feeling wry and engaging, while the facts in turn provide structure and substance.

If you weren’t planning to take a crash course in economic history but feel you should – or if you just want to see a smart movie that will hold your attention all the way through and make you laugh often and occasionally want to snarl in anger – THE BIG SHORT is fully recommended.