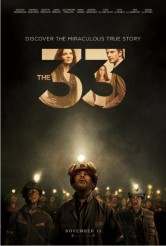 A drama that is both moving and informative 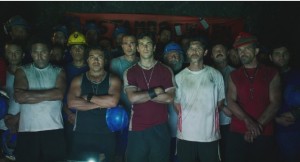 This whole review may or may not need a spoiler alert, depending on what draws people to the theatre in the first place. THE 33 dramatizes an incident that received worldwide coverage for months in 2010. It is one of those stories that, if it weren’t true, would be almost impossible to believe. It’s all too credible that 33 miners near San Jose, Chile, got trapped deep underground by a cave-in. About 12,000 people a year are killed in mine disasters and it seems like every month there’s a story about how company greed leads to ignoring safety protocols, which in turn causes disasters. All of that is tragic but entirely believable.

The part about the events chronicled in THE 33 that’s remarkable is that, even though no one knew exactly where the miners were under all that rock and even though they initially had a supply of food and water intended to last for three days, the men survived for 69 days until the rescue effort succeeded.

Directed by Patricia Riggen and scripted by Mikko Alanne and Craig Borten and Michael Thomas from a screen story by Jose Rivera and the book DEEP DOWN DARK by Hector Tobar, THE 33 divides its time between the miners, the miners’ families, who apply so much pressure that officials realize they have to do something, and the government representatives and eventually the engineers trying to figure out whether a rescue attempt can yield positive results.

The mine collapse is presented as a horrific, chaotic, awe-inspiring catastrophe that looks like the apocalypse from our perspective. The men manage to rescue one another from being crushed and make it to “the refuge,” an underground bunker with emergency supplies, but they have no way of contacting the outside world and (thanks to the penny-pinching of the mine owners) no means of escape.

Up top, Chilean President Sebastian Pinera (Bob Gunton) correctly sees this incident as a political sinkhole in the making. He sends relatively new Minister of Mining Laurence Golborne (Rodrigo Santoro) out to the Atacama Desert to deal with the situation. As THE 33 presents it, Golborne is at first tentative, but when he’s confronted by the miners’ families, who are grouped en masse outside a fence hastily thrown up by the mine owners, he quickly grows in resolve. Even though the laws of probability dictate that the men won’t have survived longer than three days, Golborne lobbies for a gigantic excavation operation; once the press gets wind of it, Pinera and the mine owners don’t have much choice.

What follows is both properly dramatic and unexpectedly informative. Director Ritter and the screenwriters have an understandably positive view of the miners, but don’t canonize any of them. Even the generally optimistic Mario Sepulveda (Antonio Banderas), who takes on a leadership role by virtue of the fact that he thinks being organized will aid with survival, has his moments of petulance. Don Lucho (a very effective Lou Diamond Phillips) is overwhelmed with guilt and regret for not doing a better job of standing up to his bosses. There are composite characters who lash out with prejudice, paranoia and of course panic. We’ve seen plenty of scenes in this vein before, but the actors sell it – Banderas plays Mario reasoning with his comrades as though his life depends on it, as the man believes it does. Santoro’s Golborne comes close to being a flawless human being, but the Santoro still persuades us he’s a real guy who feels the weight of so many lives in his hands. Gunton is smooth and silky as Pinera.

We also actually learn a few things about mining, but it doesn’t feel like a lesson, because we’re so invested in the question of how in the world the rescue crew can get to the men that we actually desire some detailed answers. THE 33 provides these in suitably impressive yet easy to comprehend fashion.

Where the movie wobbles a bit is in the depiction of the families. It’s clear their steadfastness in the face of intimidation, exhaustion and natural elemental conditions was a major factor in the rescue. Even so, the scene of a family member’s initial confrontation with Golborne isn’t soft enough to be naturalistic and not distinctive enough to be powerful. Better is a sequence where a miner’s pregnant wife (Cote de Pablo) sings a ballad at a campfire, made temporarily fearless by weariness.

We see the real-life 33 at the film’s conclusion. They are to be commended, and this movie about their ordeal is pretty commendable as well.